U.S., Philippines and Japan conduct amphibious landing in the Philippines 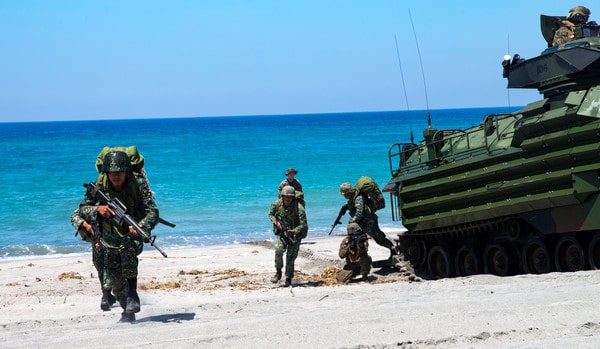 U.S. and Philippine Marines aboard U.S. assault amphibious vehicles launched from the U.S. Navy’s USS Ashland and Philippine Navy’s BRP Davao del Sur as part of a counterterrorism and humanitarian response based exercise. The ship-to-shore movement brought the U.S., Philippine and Japanese militaries together to advance amphibious capabilities.

One hour after the U.S. and Philippine forces launched, JGSDF Amphibious Rapid Deployment Brigade soldiers aboard Japanese AAVs launched from the USS Ashland to support a distinct humanitarian training mission.

KAMANDAG 2 is a 10-day training exercise designed to improve U.S.-Philippine interoperability, increase readiness, strengthen multinational partnerships, and enhance the ability of U.S., Philippine, and Japanese forces to respond to crises.

“Amphibious operations are a core competency that shapes who we are as Marines,” said Philippine Marine LtCol. Henry R. Espinoza, Chief of Staff of the Philippine Marine Ready Force. “We are anticipating the arrival of our first fleet of AAVs next year. The training we received from the U.S. Marines provides the Filipino AAV operators knowledge on how these amphibious vehicles operate, which is crucial to how our own AAV operators will effectively conduct future operations.”

The ARDB was introduced to the JGSDF in March 2018. KAMANDAG 2 is the first time Japanese AAVs have ever operated outside of Japan. During the landing, the ARDB responded to a mass casualty humanitarian crisis scenario, facilitated by AAVs for the transportation of personnel and resources.

“This exercise was a good opportunity to enhance the capability to respond quickly to HADR, humanitarian assistance and disaster relief, missions,” said JGSDF LtCol. Yoshiji Aoyama, the lead Japanese exercise planner for KAMANDAG 2 of the Bilateral Coordination Department, Ground Component Command. “It provided us the opportunity to strengthen relationships with U.S. and Philippine forces.”

As part of the training evolution, U.S. and Philippine fixed wing assets also provided aerial surveillance of the beach in support of the landing.

“Training with U.S. Marines and the JGSDF is crucial in fostering camaraderie, friendship and the exchange of ideas,” said Espinosa. “KAMANDAG 2 allowed expertise between the U.S. and Philippine forces to be exchanged. Next year we will use our own AAVs in KAMANDAG 3.”

KAMANDAG is an acronym for the Filipino phrase “Kaagapay Ng Mga Mandirigma Ng Dagat,” which translates to “Cooperation of Warriors of the Sea,” highlighting the partnership between the United States and Philippine militaries. KAMANDAG 2 will increase overall U.S. and Philippine readiness, improve combined responsiveness to crises in the Indo-Pacific region, and strengthen both countries’ decades-long partnership.

For photos and stories about KAMANDAG, please visit: www.dvidshub.net/feature/KAMANDAG