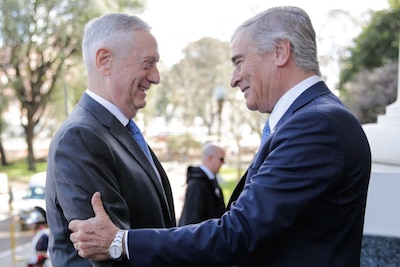 The United States and Argentina are in basic agreement about the security situation in South America, and the countries are looking to increase military-to-military ties, Defense Secretary James N. Mattis said today.

Mattis spoke with reporters traveling with him while en route from Buenos Aries, Argentina, to Santiago, Chile.

“We’re in agreement, with an appreciation of the security situation in the region,” he said. “There were no disagreements on the situation – the worsening situation – in Venezuela.”

Argentine and U.S. officials want a stronger military-to-military relationship, and the two sides discussed ways to move this process along, Mattis said. The two sides agreed to increase education, and exchanges of information.

“It was mostly about consultation, collaboration and defining … what we need to focus on,” Mattis said. “Now we’ll go back and we’ll start all the various action meetings and get it all underway.”

Earlier in the trip, the secretary discussed the situation in Ghazni, Afghanistan, where Taliban forces attacked Afghan security forces.

“It looks like many of the enemy have run, but some are in the town in homes, fighting from inside homes, with all the danger and the slowness that requires in order to get them out without hurting innocent people,” Mattis said.

He called the Taliban attack a “continuation of their willingness to put innocent people in harm’s way; nothing new. It’s the usual endangering civilians that’s part and parcel of what they’ve done for the last 20 years.”

“Every battlefield is a humanitarian field,” he said. “It is … oftentimes a conventional war, too, but especially so on counterterrorism, when you have people who lack any kind of manhood [who] would fight among innocent people, and use them for protection.”