Two K9s retired to homes of their handlers 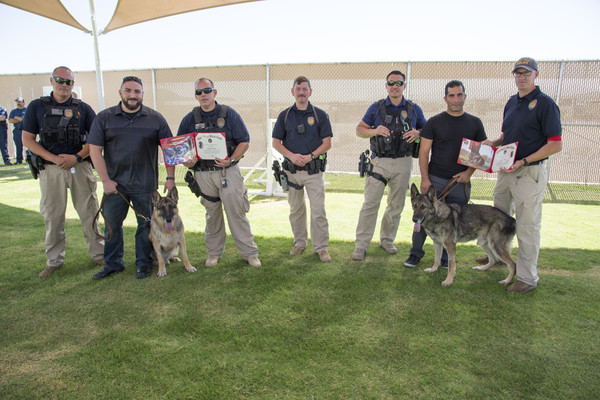 Two four-legged police officers ended their long careers with the Marine Corps Police Department aboard MCLB Barstow by getting their forever homes with their human partners, Sept. 12.

Military Working Dogs “Ricsi” P648, and “Colli” P577, both German shepherds, were officially retired in a ceremony held at the K-9 Training Field behind the Adam Leigh Cann Canine Facility aboard Marine Corps Logistics Base Barstow.

“Tony” Nadeem Seirafi was the first of five handlers Ricsi worked with beginning in 2010 aboard MCLB Barstow. He has since moved on to Marine Corps Air Ground Combat Center Twentynine Palms, Calif., but returned for the first time in years to pick up the dog he considers to be a friend.

“I love that dog and I’ve been dreaming about doing this for years,” Seirafi said. “Retired police dogs can be a little more stubborn than a regular dog, but they just basically want to be loved and lay on the couch and be lazy.”

Jacob Lucero was a Marine Corps military policeman partnered with MWD Colli when he was stationed Marine Corps Air, Ground Combat Center Twentynine Palms, Calif., from 2011 to 2012. Lucero moved on after the Corps to become a correctional officer and is now a student in his native Kingman, Ariz. Colli was sent to MCLB Barstow in 2016.

“I started working with Colli when he was about a year and a half old,” Lucero said. “He’s now nine, which is a good age for a police dog to retire.”

He agreed with Seirafi there are some unique challenges to adopting a police dog, but they are worth it for the loyalty and love they give in return.

“One of the issues of adopting a working police dog,” Lucero said, “is that they sometimes need more socializing because they had only been with their handler or in a kennel.”

Both MWDs received certificates of appreciation acknowledging their retirement from the K-9 unit and “In grateful recognition of service faithfully performed.”

Lieutenant Steven Goss, kennel master, MCPD, concluded the ceremony with the reading of the short poem “He Is Your Dog”:“He is your friend, your partner, your defender, your dog. You are his life, his love, his leader. He will be yours, faithful and true to the last beat of his heart. You owe it to him to be worthy of such devotion.”