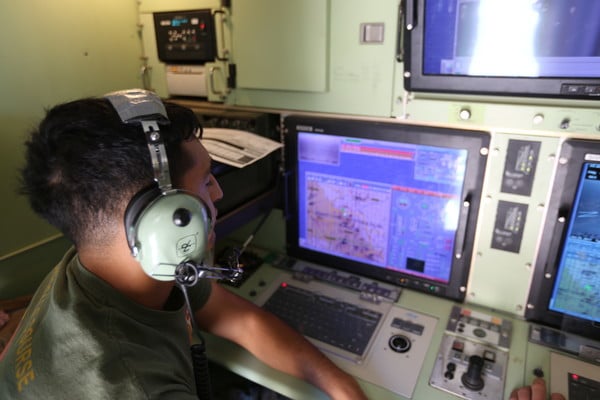 Maintaining a constant state of deployment readiness is a key ingredient for Reserve Marines to stay successful and relevant in what they do and how they perform. Whether it be annual training requirements, or specific training geared towards individual military occupation specialties, it all comes together to aid in a unit’s ability to rapidly respond when called upon.

Each year, Reserve Marines traditionally conduct 48 drill periods and 14 days of annual training. During this time, the Marines are developing and enhancing their skills, so they can provide highly trained individuals to augment, reinforce and support active forces in global engagement.

“We have four outlying sites as a apart of Marine Air Control Group 48, and through Night Watch, we tested if we could talk with each other, coast-to-coast, using the communication and radar equipment we have that gives us an air picture to monitor,” said Maj. Thomas Dunaway, operations officer with Marine Air Control Squadron 24, MACG-48, 4th MAW. “It is a 48-hour exercise where the crews practice their turnovers, brief and debrief, and gain a better understanding of their gear.”

Unlike active duty Marines, who have 365 days each year to master their specialities, Reserve Marines have limited time to become proficient. Capitalizing on time and staying focused during each training block ensures the Marines maintain their relevancy in each military occupation specialty.

“There is a series of qualifications that all Marine Air Command and Control System Marines must meet to be qualified to sit in certain positions, and they get very limited opportunities to meet those mission essential tasks and earn those qualifications,”  Dunaway said. “Night Watch gets the Marines qualified so we can maintain readiness as a unit and we can forward deploy.”

With a staple of the Marine Corps being to “train like we fight”, simulated realistic training is essential to keeping the Marines skills sharp, exposing them to situations they may encounter in the future.

“This exercise is important because in a real scenario, we could potentially have degraded communication with some of our more high-end equipment, forcing us to go back to basics,” Dunaway said. “The cyberspace threat makes it crucial to test these capabilities, and know how to operate everything we’ve got.”

Involving various unit’s from across the country, Night Watch was an opportunity for the Marines to not only collaborate with each other, but understand how to integrate and operate together as one.

“What is unique about Night Watch is that it is the only time all year that 4th Marine Aircraft Wing will get to do a Marine Air Command and Control System exercise all together,” Dunaway said. “Being dispersed geographically, we typically conduct separate training events with the different squadrons. This is the one time all of our sister squadrons will look at the same picture and same simulation together.”

Every Marine, no matter the job or rank, plays a vital role in the success of their unit. Understanding how each Marine fits in to the puzzle and how the skills they bring to the table effect the outcome of a scenario, is a key learning objective that Night Watch aimed to achieve.

“The biggest takeaway from this exercise is the Marines having a better understanding of what a Marine Air Command and Control System is and what our job is,” said Gunnery Sgt. David Lopez, operations chief with MACS-24, MACG-48, 4th MAW. “We are talking everyone from administration, to motor transportation, to logistics. Just these Marines seeing what they do, no matter how small their job is, and how it plays in to the Marine Air Command and Control System as a whole, is a success.”

TF 51/5 Marines and Sailors participate in Salute to Life