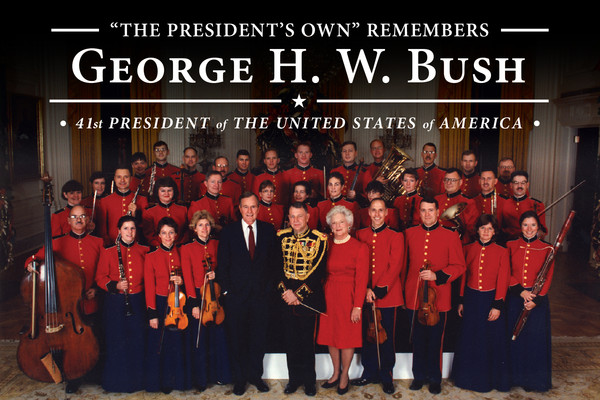 As the nation mourns the passing of one its finest patriots, current and former members of the Marine Band remember President George H. W. Bush as a man whose love of music and uncommon graciousness elevated the unique relationship between the Chief Executive and “The President’s Own.”

“Although President Bush served as our Commander-in-Chief before my time in ‘The President’s Own,’ the close relationship he developed with the Marine Band is well-known,” Music Adviser to the White House and Marine Band Col. Jason K. Fettig said. “We have been fortunate to have had wonderful moments with every president we serve, but President and Mrs. Bush’s gratitude for our Marines and for the special music we provide in The People’s House was especially warm and always engaging. He never missed an opportunity to connect with those around him and thank them for their contributions, and the men and women in the band who got to know President Bush both during his administration and in the many years beyond will always remember his ever-present appreciation and admiration for all those who served our nation alongside him.”

Col. John R. Bourgeois, USMC (Ret.), Marine Band Director from 1979-96, recalled memories of President Bush with great ease. “Of all the presidents I served, he was the most conversive and was the kindest man in the world,” he said. He recounted how the president would make a point to bring the guest of honor from each state dinner over to Bourgeois and the Marine Chamber Orchestra to make introductions. “It was very much like being a part of the family,” Bourgeois said. It was during President Bush’s administration, in February 1990, when Bourgeois led the Marine Band on an historic 18-day concert tour of the former Soviet Union as part of the first ever U.S.-U.S.S.R. Armed Forces band exchange. “The president was integral to making that tour happen and while we were there we saw the end of the Soviet Union,” he said.

On a more light-hearted note, Bourgeois recollected an event on Dec. 7, 1992, when the Marine Band performed Hail to the Chief at a White House holiday reception for the president’s staff. At the end of the fanfare, an unlikely gentleman made his way through the crowd and took the podium: comedian Dana Carvey, known for his uncanny impression of the president. But it was the annual Gridiron Club dinner where Bourgeois witnessed President Bush in a truly nostalgic moment. It was March 1993 and Gridiron president, Los Angeles Times bureau chief Jack Nelson, sat at the center of the head table with newly-inaugurated President Bill Clinton on one side of him and former President George H. W. Bush on the other. As Bourgeois led the Marine Band to the dais for The Star-Spangled Banner, he saw both Clinton and Bush lean over to whisper to Nelson. Nelson later told Bourgeois that President Bush commented that there are many things he won’t miss about being president but the Marine Band isn’t one of them.

Few members of the Marine Band can boast of a better first performance at the White House than former Marine Band pianist Master Gunnery Sgt. Robert Boguslaw, USMC (Ret.). Although he had performed at the White House before May 14, 1992, this was the first time he performed solo in the private residence. As he played a medley of Broadway show tunes from “Carousel” and “Oklahoma,” President Bush and former Soviet President Mikhail Gorbachev stood in the well of his piano where he overheard the two leaders discuss perestroika and the fall of the Berlin Wall. “President Bush was always a gentleman and always came over to shake my hand and thank me,” he said.

Master Gunnery Sgt. Peter Wilson, violinist and current string section commander, joined the Marine Chamber Orchestra in 1990, halfway through President Bush’s term. What impressed him about the president was that he always made a point to go out of his way to acknowledge and thank the musicians for their participation at assorted events, even if it meant shaking off his handlers to seek out the orchestra. It was during President Bush’s tenure that Wilson and several other musicians founded the Free Country ensemble and one of their early performances was at President Bush’s daughter Dorothy Bush’s wedding to Robert P. Koch at Camp David on June 27, 1992. In addition to Free Country, the Marine Band provided a brass quintet in the chapel for the ceremony and a dance band for cocktail hour. After the event, as the musicians packed up their instruments to leave, President and Barbara Bush found them to shake each of their hands, ask their names, and thank them for their music. Wilson said from that day forward, President Bush remembered his name and called him Pete each time he saw him at the White House. “He had an amazing ability with names and people,” Wilson said.

At a congressional picnic Wilson was singing with Free Country and he recalled President Bush seemed to appear from out of nowhere and shook hands with each of the musicians as they performed. Wilson considers it a point of pride that he was able to greet Bush and not lose a beat during the fast-moving lyrics of Billy Joel’s “Travelin’ Prayer.” It was another event, however, that Wilson can never forget. The Marine Chamber Orchestra was performing at the White House on Jan. 16, 1991 and President and Mrs. Bush were greeting visitors in a receiving line. Wilson noticed then-Chairman of the Joint Chiefs of Staff General Colin Powell walk up to the president in his green service uniform to pull him away. Bush didn’t come back to the event. When Wilson returned to Marine Barracks Washington, the news on the television in the lounge was reporting the first bombing attacks on Baghdad and the beginning of Operation Desert Storm.

“We all recall how very kind and appreciative he was of everything the band did at the White House,” said Former Executive Assistant to the Director Capt. Frank Byrne, USMC (Ret.). “Mrs. Bush was also wonderful. I do especially recall the two Desert Storm victory parades, one in New York City and one in Washington. I marched and played in both. In NYC the crowds were so big that we hardly had room to get the band through the streets at certain points. There was ticker tape, but also all kinds of paper, including big stacks of continuous feed letter sized paper that were a challenge to get through. President Bush and Gen. Norman Schwarzkopf were in the reviewing stand and were so happy and proud. It’s not often the band gets to do a big street parade in good, not freezing, weather and it was a thrill to participate.”

“I will always remember President and Mrs. Bush as being unfailingly gracious, kindhearted and appreciative toward the members of the Marine Band,” recalled Former Director Col. Timothy W. Foley, USMC (Ret.).

The late Marine Band pianist Master Gunnery Sgt. Charles Corrado, USMC (Ret.), served ten presidents from 1958-2003. His wife Martha reflected on “Charlie’s” many, many encounters with President Bush and recalled in particular when the president requested Corrado to perform at his residence at Kennebunkport, Maine, on July 10, 1991, while he and Prime Minister Toshiki Kaifu of Japan prepared for the upcoming Economic Summit of the Industrialized Nations in London. “I was jealous that he got to go!” she said. “He played in the sunroom while the meetings took place and the family was very appreciative of him being there.”

Former principal cello Master Gunnery Sgt. Marcio Botelho, USMC (Ret.), remembered an equally memorable performance for President Bush: “It was my first year in the band and sometime between April and June I was at home when I got a call from work. The question was, ‘How quickly can you get to the Barracks? Because we have to go to the White House.’ I came in right away and we immediately departed to the White House. Only three of us went, since we were the only available musicians: concertmaster Master Sgt. Bruce Myers, violinist Gunnery Sgt. Jim Diehl, and myself. President Bush was having a working lunch with Lothar de Maizière, the newly-elected prime minister of the old GDR (East Germany) and the White House staff had discovered that the PM had been a musician. At the time we were told he had been a cellist. Anyway, we rushed in to the house, put our cases in the mezzanine level holding room and went up to the state floor. President Bush and the PM had dined in the state dining room and we set up in the Blue Room. No sooner had we set up, the president and his guest walked in and took a seat about six feet from us. Bruce called out a tune: Haydn’s London Trio No. 3, 1st movement. We played it, they thanked us, we returned to the barracks. Possibly the shortest performance I ever played at the White House.” Botelho was also quoted in a Dec. 1989-Jan. 1990 issue of the Marine Band’s newsletter Notes saying, “It’s surprising because even though we are performing background music, people often make it a point to compliment us. In fact, at all of the state dinners the President and Mrs. Bush have greeted us and thanked us at the end.”

In 2011, the George H. W. Bush Presidential Library requested a Marine Band uniform for a new exhibit featuring a baby grand piano from the Bush’s collection. Then-Drum Major Master Gunnery Sgt. William L. Browne, USMC (Ret.) prepared the uniform and personally fitted the mannequin that would wear it. After Browne took the uniform to the tailor for alterations and cleaning, he carefully packed it in his carry-on luggage and traveled to College Station in December 2011 to ensure that it was installed correctly. He arrived to find the mannequin sitting at the piano with permanently bent legs that presented some technical challenges. He assisted curator Susanne Cox in putting the mannequin in place on the bench at the piano and made last minute adjustments to the fit and appearance. One thing he couldn’t adjust, however, was the length of the mannequin’s hair. “I know how hard it is to give a mannequin a haircut so I made an exception just this once,” he said with a wry smile. Browne was honored to participate in this exhibit for the senior former President Bush. “Every time I’ve seen him at an event, he and Mrs. Bush always made a point to come over to thank the band,” he said. “At my very first presidential event as Drum Major in 2008, President Bush stopped me in the hallway to say how much he appreciated the band and how good it was to hear us.”

The Marine Chamber Orchestra, conducted by Col. Fettig, will perform one last time for President Bush at his funeral service at 11 a.m., Wednesday, Dec. 5 at the Washington National Cathedral in Washington, D.C. Selections include Gustav Holst’s Nocturne from A Moorside Suite, Kevin Siegfried’s arrangement of “Lay Me Low” from Shaker Songs, Aaron Copland’s Our Town, Paul Christiansen’s arrangement of “My Song in the Night,” John Williams’ Hymn to the Fallen, and Samuel Augustus Ward’s “America, the Beautiful.”