The Corps’ new fire truck is rolling toward FOC 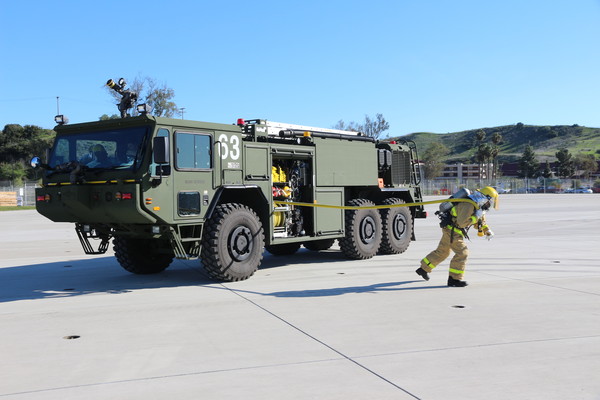 Marine Corps Base Quantico, Va.—Aircraft Rescue and Fire Fight Marines are getting a modernized rig—their first in over 30 years. The P-19R ARFF will be the principal firefighting and crash response vehicle for the Marine Air Ground Task Force, and will be able to support all operations where the MAGTF is employed.

The Medium and Heavy Tactical Vehicles program office at Program Executive Officer Land Systems started fielding the P-19R vehicle in June 2017 and, since then, have fielded the majority of the new trucks to Marine Corps installations across the continental United States.

“So far, the reception from the Marines on the capability of the truck has been outstanding,” said Eric Miller, product manager for the P-19R at PEO Land Systems. “Obviously after 30 years, Marines are excited about having a new capability. It’s been very well received.”

The technological advancements made by Industry over the past few decades are reflected in the modernized truck. The P-19R integrates combat-proven performance and advanced firefighting technology to deliver cutting-edge on-road and off-road rescue and firefighting capabilities to permanent and expeditionary airfields throughout the Marine Corps.

With the P-19R—as with its predecessor, the P-19A—Marines are able to counter aircraft fires caused by crashes or other causes. The P-19R is safer, faster, has a more powerful engine and has nearly double the fuel capacity compared to its predecessor. The P-19R’s 600 horsepower engine enables the vehicle to accelerate from zero to 50 miles per hour in under 25 seconds, and can reach speeds over 70 miles per hour, enabling ARFF Marines to swiftly reach the scene of the action. To put this in context, the Corps’ workhorse Medium Tactical Vehicle Replacement—more commonly known as the “MTVR” or “7-ton”—takes over 30 seconds to reach 50 miles per hour and has a maximum speed under 70 miles per hour.

Inside the cab, the P-19R is outfitted with a 10.4-inch display unit—dubbed the “command zone”—giving Marines the ability to monitor different aspects of the vehicle. The command zone enables Marines to keep tabs on everything from tire pressure to water and fluid levels, in addition to other internal diagnostics.

“The P-19R is a lot more technologically advanced and has more bells and whistles than the older [fire trucks] do,” said Cpl. Dominic Wirthlin, ARFF specialist with Marine Corps Air Station Camp Pendleton Headquarters & Headquarters Squadron in California. “The command zone tells us if anything’s wrong with the vehicle that can cause an issue so we can fix it before something breaks.”

The bumper and roof turret controls on the P19-R also received an upgrade. Using an electronic joystick, Marines are now able to maneuver the turrets and—with the push of a button—switch between spraying water and flame-suppressing foam.

“The turrets are manually-operated. It’s almost like playing a video game,” said Sgt. Christopher Cunningham, another ARFF specialist at MCAS Camp Pendleton H&HS. “Everything [on the P-19R] is technologically advanced. It’s just a really cool rig.”

Unlike its predecessor, however, the P-19R can be used off the airfield in tactical operations, such as combating structural fires and wildland fires. The ruggedized P-19R was designed so Marines have the ability to navigate through any terrain off-road they may encounter—from the mountains to the desert to the jungle.

“Prior to the P-19R, the fire station assets and the assets that the Marine Wing Support Squadrons use weren’t shared,” said Suzanne Deer, a logistician with the MHTV program office at PEO Land Systems. “With the P-19R, one vehicle can be used interchangeably between the air stations and the tactical community.”

From logistical standpoint, the P-19R shares major components with other tactical vehicles in MHTV program portfolio—specifically, the Logistics Vehicle Systems Replacement vehicle and the MTVR—which will make it easier to source and replace parts as needed in its 22-year future, said Deer. For example, the P-19R shares a common engine with the LVSR, and uses the same suspension system as the MTVR. Additionally, the P-19R uses the same wheels and tires as both the LVSR and MTVR vehicles. It also shares the same central tire inflation system capable of maintaining and adjusting tire pressure according to the terrain, along with providing runflat protection for punctured tires.

With the bulk of the vehicles already fielded across I and II MEF, the program office is heading to Japan this summer to field the P-19R to III MEF and its associated Marine Wing Support Squadrons and Marine Corps Installations. The program office anticipates completing fielding of all 164 vehicles by February 2020.