The amphibious tip of the spear 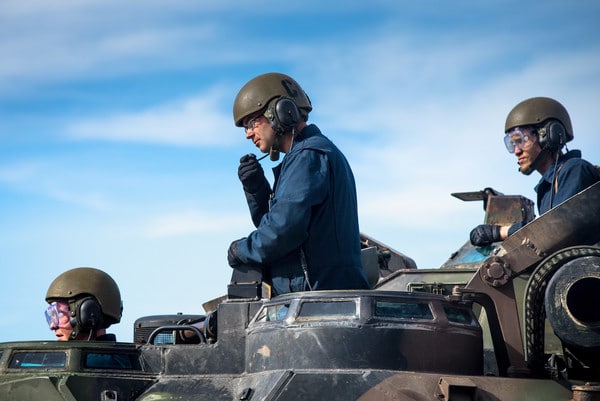 Amphibious warfare is the cornerstone of how the Marine Corps trains and fights. For Assault Amphibious Vehicle crewmen or Amtrackers as they are often identified, the role is critical and contributes immensely to the Marine Corps warfighting capability. “AAV crewman are the tip of the spear when it comes to amphibious operations,” said U.S. Marine Corps Sgt. Kevin Storman, instructor, Assault Amphibian School Battalion, Training Command.

At AAS the curriculum is focused on training Marines in the military occupational field of an AAV crewmen, which entails learning the base knowledge of how to operate, fix and tactically employ an AAV.

The AAV crewmen course is 55 training days long. In the first phase of the course, Marines are taught how to drive an AAV on land. The second phase teaches the basics for water driving and the third phase teaches employment of the vehicle’s two weapon systems; the MK19 40 mm grenade launcher and the M2 .50 caliber machine gun. In the final portion of the course, students learn how the AAV compliments non-motorized infantry forces, and advanced amphibious assault tactics.

“We teach the students everything from starting the vehicle to all the components on the vehicle and what they are called,” said Storman. “We also teach them how to drive the AAV on land and on in the water. Finally, how to shoot the vehicle weapons and how to employ them tactically.”

Amphibious assault school’s instructors are hand-picked for being the best in their community, and because they possess increased levels of experience. The greatest advantage of this selection process is that it ensures their knowledge and expertise is passed to new students, and that the probability of continued success on the battlefield improves.

“Amtraking isn’t just about what you learn in the classroom, it’s about what you can come up with on the fly,” said Storman. “As an amtraker you have to be able to think on your feet. Come up with the best solution for the situation that is going to help you to complete the overall mission.”

AAVs transport Marines from ship to shore and can move inland up to 200 miles supporting the infantry along the way with fire power and supply.

“The amtrak community is very prideful in what we do,” said Storman. “We are what makes the Marine Corps amphibious, and we believe that to the core of our soul. We take what we do very seriously and we are some of the hardest working Marines you will find.”

Storman said it is important to continue to pass AAV skills down to new Marines to keep the Marine Corps alive and fighting hard. Adding that the “ball needs to keep rolling,” and AAV crewman must keep applying their knowledge and skills now and with future amphibious vehicle technologies.