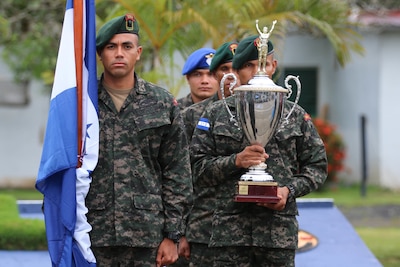 Seventeen countries, from the Caribbean, Central America, South America — including the United States — participated in the ceremony opening the competition, which is hosted by Panama’s Ministry of Public Security.

Fuerzas Comando has been held annually since 2004, and this is the first time Panama has hosted it. Through friendly competition, officials said, this exercise promotes interoperability, military-to-military relationships, increases training knowledge, and improves regional security.

“Together we will improve our ability to defeat our challenges,” Greata said.

The nine-day event will test participants’ technical and tactical skills and will include a distinguished visitor program.

“In this regional event, you all are the best of the best of the nations you are representing,” said Alexis Bethancourt Yau, Panama’s public security minister. “So make your comrades proud by giving everything you have in every moment.”

The special operations skills competition will include a physical fitness test, confidence course, close-quarters combat, marksmanship, a ruck march and an obstacle course.

Greata closed his remarks by urging those participating to share ideas and to build trust and knowledge.