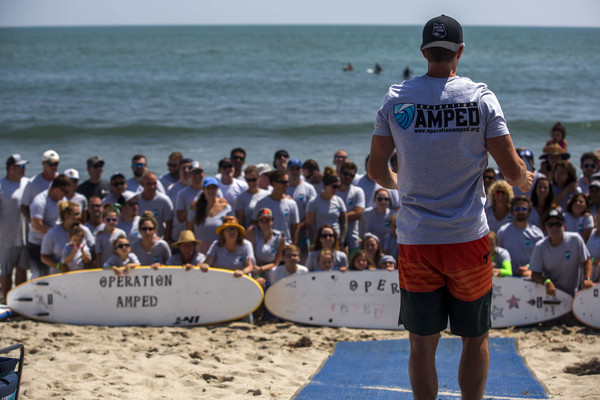 Service members often encounter physical, psychological and emotional adversity when protecting the freedoms this country was founded on. The injuries sustained both on and off duty require recovery in many forms – including physical competitions, religious programs, community outreach opportunities, behavioral health and more. Some may only need a surfboard and a wave to ride.

Veterans, recovering service members and their loved ones attended the 12th Annual Operation Amped Surf Camp at Marine Corps Base Camp Pendleton, California, Aug. 17-19. Operation Amped is a non-profit organization that promotes surf therapy to aid in the recovery of wounded, ill and injured veterans and active-duty service members.

According to Joseph Gabunilas, Operation Amped co-founder, this program exists to provide a positive change in a participant’s future. Operation Amped accomplishes this by providing surf training once a year to wounded warriors, family members and veterans.

“It’s a good way to keep that negative stuff out of your mind while catching a wave,” said retired U.S. Marine Corps Gunnery Sgt. David Simons, participant at Operation Amped. “Surfing has given me a goal, something to work towards and keep my focus straight.”

The organization, which began in September 2006, had helped nearly 300 recovering service members, veterans and their loved ones. Along with the support and attendance of family members and friends, that number has now reached the thousands, said Gabunilas, who served in the U.S. Army. Having both the recovering service members and their loved ones in attendance, can provide the therapy needed to overcome the trials and tribulations they may be experiencing.

“Ocean therapy is good for the mindset,” said Simons. “It’s good for those that have difficult issues they’re dealing with.”

Some of the adversity these warriors face include the loss of fellow service members in and out of combat,overcoming pain and physical injury. For three days each year, with the support of organizations such as this one, participants move closer to recovery one wave at a time.

Provisions come from volunteers and supporters who donate surfboards, wetsuits, food, tents, and tables. Most importantly, they donate their time.

“This is my way of giving back,” said Gabunilas. “I served 21 years and this is another way I can give back to the brave men and women fighting for our country.”

This annual event drives a passion for surfing for some and provides a recreational outlet for warriors and their family members to enjoy while physically and mentally challenging themselves in the water. The next clinic is scheduled for summer 2019.

Wounded Warriors ‘Catch a Wave’ as Part of Recovery