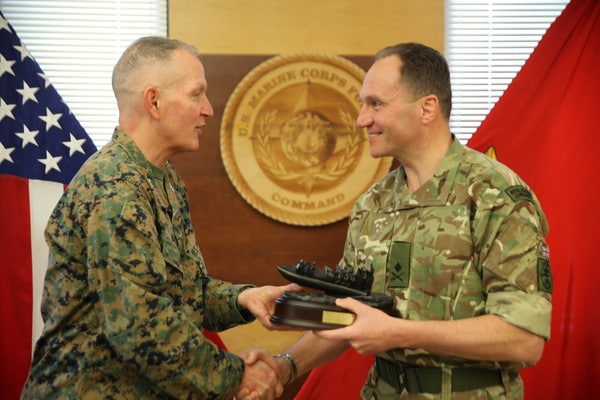 The meeting was an opportunity for the two senior leaders to strengthen the long-standing rapport between the services while also speaking about current and future operational advantages gained from training together.

“It is a relationship built on both mutual experience and cooperation, in both peace time and conflict, and most importantly a shared set of values and capabilities,” said Brilakis. “The Marine Corps’, both Royal and United States, will maintain the ability to interoperate and rely upon each other.”

When discussing the significance of NATO joint training opportunities and exercises, such as Bold Alligator and Trident Juncture, Stickland emphasized the importance of always improving joint capabilities and readiness.

“As we develop both Royal Marine and Royal Navy capabilities with the U.S. Marine Corps and U.S. Navy, each time we undertake a NATO exercise we should seize them as an opportunity and as a building block to develop our capability, our interoperability, and our collective ability to project power,” said Stickland. “That’s why these NATO events are so key.”

Some of the advantages gained from training together include the sharing of tactics, techniques and procedures, and combining the experiences of each service to create a larger capacity and achieve mission success. Tartan Eagle, and annual exercise involving Marine Corps Security Force Regiment Marines training alongside British Royal Marine Protection Teams is an example of how sharpening skills and exchanging ideas with one another is beneficial to both services.

“No matter the operating environment, whether it’s in the High North, whether it’s at sea, whether it’s on a littoral, each one of those opportunities gives us a chance to improve,” said Brilakis.

The two commanders discussed future challenges and conferred how the strong relationship with the Royal Marines adds a competitive advantage to the U.S. Marine Corps and other NATO partners.

“There is a tyranny of distance and time to bring forces together,” said Stickland. “Thus we should exploit the Royal Marines and Royal Navy’s forward deployed European posture to shape the battlefield and create a doubt in the enemies mind, as larger scale forces deploy and aggregate together for decisive effect from the sea.”

Combining the joint capabilities of both services also provides an operational benefit to the commanders.

“Every opportunity we have to bring capabilities and forces together in a combination that allows us to understand and display the unique capabilities of one another gives us the opportunity to interoperate in a much better way,” said Brilakis. “It also provides nations the opportunity to develop the trust necessary to be able to share information and conduct activities with a higher degree of operational effectiveness.”

Brilakis highlighted how the unique alliance between the two nations will positively impact future operational capabilities.

“Take a look at what we are planning to do with the Royal Navy and Royal Marine Corps in 2021, where 5th generation United States fighter jets are going operate on the brand new naval capability of the Queen Elizabeth,” said Brilakis. “It provides an incredible opportunity for us to understand our interoperability requirements, our ability to conduct those operations in time, in space and in locations to provide a rapid capable deterrent force.”

The two commanders discussed a wide array of topics concerning operational readiness and future training opportunities. However, the mutual understanding between the two was the core values and similarities between the two Marine services, which are deeply interwoven.

Acting Secretary Pleased With Progress of Coalition to Defeat ISIS