Recycling and disposing HAZMAT for readiness 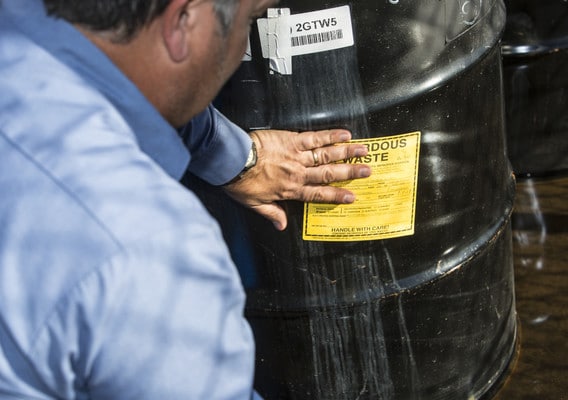 Camp Pendleton, Calif. — Imagine that a lithium ion battery is thrown away in the trash and taken to a landfill. It just happens to be summer time, and it is record hitting heat. The lithium ion battery that was improperly disposed of overheats and activates a chemical reaction within the battery that ignites it. This can be a very typical scenario, but with the right resources and education, easily avoidable.

The Hazardous Material (HAZMAT) Waste Section, Environmental Security Department, Marine Corps Installations – West, Marine Corps Base Camp Pendleton, coordinates with units that train on Camp Pendleton to properly dispose of hazardous waste so scenarios like the one above do not happen. The waste section ensures everyone on base deals with hazardous materials properly and in accordance with federal and state regulations. In doing so, people, property and training do not suffer the consequences of improperly handling hazardous materials.

“As new technologies come up we have to adapt and learn how to manage the waste produced from them properly,” said Bryan Osborn, head of the HAZMAT section. “If we don’t take care of this base and damage our training areas, then we would have to close down that training area. This would also require Camp Pendleton to pay federal and state fees, which would come out of the training budget.”

To further demonstrate the effectiveness of the HAZMAT section’s recycling effort, its proper handling of lead-acid batteries generated a revenue of $50,000 which might have also cost over $54,000 in potential fees if improperly disposed.

“We look for opportunities to reduce, reuse and recycle materials which saves units and the Marine Corps money,” said Osborn.
Osborn said a misconception about properly disposing hazardous material is that it is an extra burden or chore, but in reality, ensuring proper management of these things saves money and the environment.

“Environmental security is here to help,” said Santino Smith, environmental protection specialist also with the HAZMAT Waste Section. “When you have the military units take a hit, the base takes that hit. That is why we are here to help prevent that from happening and more importantly, sustaining the environment on the base for future training and development of Marines and their operational capabilities.”

Update from the vice commandant