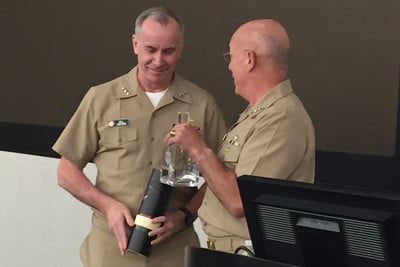 The reign of the Naval Academy’s Class of 1978 is over as Navy Adm. Kurt Tidd passed the Old Goat Award decanter to Vice Adm. Bill Lescher during a ceremony at the Navy Yard, here last week.

The lighthearted ceremony was part of the chief of naval operations three- and four-star gathering. Navy Adm. John Richardson, the class of 1982, poked fun at “the old and gray” goats.

Lescher serves at the Pentagon as the deputy chief of naval operations for integration of capabilities and resources.

“This is one of those dubious distinctions,” Tidd said in the unofficial ceremony. “Dubious because there is certainly no one who enters the Naval Academy on induction day and says, ‘Man, I hope I can be the Old Goat.’ Usually they are hoping they can just make it through the day!”

Tidd also modified the exchange of the crystal decanter, which has the initials and class years of the recipients engraved on it. “I’m a big believer in a learning culture and a learning institution, and when I got this from my classmate Harry Harris, I looked at it and said there is something wrong with this,” Tidd said. “I have taken it on myself to modify this slightly and I pass this on to everyone who holds this subsequently that at least as long as the trophy is a decanter, it should no longer be empty.”

Tidd, highlighting his time in Central and South America, also presented Lescher with a bottle of 23-year old Zacapa rum from Guatemala to fill the decanter.

Lescher thanked Tidd, not only for the decanter and rum, but for his 40-year Navy career. “I really want to congratulate Admiral Tidd on his impressive and accomplished career,” he said. “I appreciate the honor and privilege of following you, and I look forward to passing this on to somebody else here.”

For the Navy this is a relatively recent tradition, starting with Navy Rear Adm. Alton Stock, who graduated from the academy in 1972.