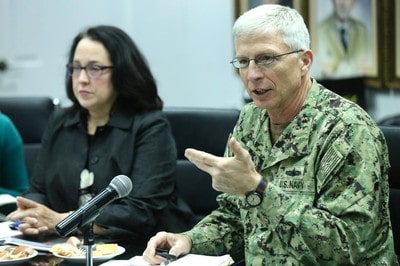 The commander of U.S. Southern Command provided an assessment of Southcom’s concerns and initiatives to lawmakers today during testimony to the Senate Armed Services Committee regarding the defense authorization request for fiscal year 2020 and the Future Years Defense Program.

“China has accelerated expansion of its ‘Belt and Road Initiative’ at a pace that may one day overshadow its expansion in Southeast Asia and Africa,” Navy Adm. Craig S. Faller told the committee members. The initiative aims at growing China-centered infrastructure development and investments on a transcontinental scale. “Belt” refers to refers to overland road and rail transportation routes, while “road” refers to sea routes.

Russian activity in the region is also raising concerns — including its support for autocratic regimes in Venezuela, Cuba and Nicaragua, Faller added. “Russia supports multiple information outlets spreading its false narrative of world events and U.S. intentions,” he said.

And, the admiral noted, “Iran has deepened its anti-U.S. Spanish language media coverage and has exported its state support for terrorism into our hemisphere.”

Partnerships are important to efforts to address these and other concerns in the region, such as criminal organizations, narcotraffickers, illegal immigration and violent extremists, he told lawmakers. “Strengthening partnerships is at the heart of everything we do,” Faller said.

In several nations, such as Brazil, Colombia and Chile, these partnerships are important drivers for regional stability and security, he said. In addition, Argentina “has reinvigorated military-to-military interactions” and, along with the U.S., co-hosted the annual South American Defense Conference in August, Faller noted.

That conference was a forum for dialogue among 11 nations, facilitating the exchange of ideas, experiences and perspectives on defense issues, and promoting cooperative approaches to regional security.

Peru continues a tradition of strong liaison officer exchanges with Southcom and recently conducted training with the U.S. Marine Corps, the admiral said.

In the absence of an enduring U.S. military presence in most of Latin America and the Caribbean, recurring rotations of small teams of U.S. active and reserve forces “play central roles in building trust and enabling the exchange of critical expertise,” Faller said.

For example, the State Partnership Program links a state’s National Guard with the armed forces or equivalent of a partner nation, “leveraging National Guard capabilities for engagements that build enduring relationships and advance mutual defense and security goals,” he said.

Of the 75 SPPs worldwide, 24 are in Socom, he said, but noted that number includes an inactive partnership between Venezuela and Florida.

Another way the U.S. plays a military nonenduring presence role is through its participation in multinational exercises such as Unitas, a naval integration exercise; Panamax, the defense of the Panama Canal; and, Cruzeiro do Sul, a regional air exercise hosted by Brazil, he said.

These are just a few of the many ways the U.S. cooperates with partner nations, Faller said. “The men and women of our team work every day to earn the trust of partners in Latin America and the Caribbean,” he added.