One of the last living WWII Marine fighter pilots 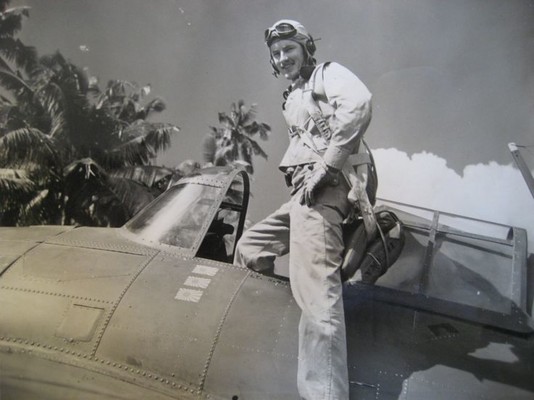 OKINAWA, Japan — Sam Folsom, born July 24, 1920 in Quincy, Massachusetts, was one of the first echelon of 17 Marine fighter pilots with Marine Fighter Squadron 121 tasked with defending Guadalcanal. He is also one of the last living Marine Corps WWII combat pilot.

It was the summer of 1941, while Folsom was attending a flight training program in Jacksonville, Florida, that the unthinkable happened.

“I was lying in my bunk in Florida,” Folsom recalled. “I turned on the radio and it blared out ‘Pearl Harbor has been attacked’, so I did what any patriotic American would’ve done. I jumped to my feet, got dressed and ran to the door as fast as I could.”

Folsom completed training at the end of 1942 and received orders to Miramar, California, where he checked into his new unit, VMF-122. Later, the squadron was combined with another to form VMF-121. Folsom’s assigned fighter plane was a Grumman F4F Wildcat which he trained in for months before his unit was sent overseas to New Caledonia briefly, before being sent to Guadalcanal in early September, 1942.

“I spent six or eight months on the west coast in a squadron with about 40 pilots and only eight or 10 planes, so as you can imagine none of us got much training,” Folsom said.

Folsom arrived to the Island Oct. 8.

The first few days of combat were rough for Folsom. In training the highest they had ever flown was roughly 10,000 feet and previously Folsom had only fired his guns once in a training exercise. Then suddenly his unit was sent on a mission dispatched at 30,000 feet where they found themselves above a Japanese formation of G4M Betty Bombers with an escort of fighter planes. When they dived down to attack Folsom lost control. After recovering and regaining control, he closed in on the bombers and pulled the trigger only to find out his guns wouldn’t fire. Due to the lack of flying experience at this altitude the unit didn’t realize that lubricating the weapons before flying would freeze the lubricant at this high of an altitude.

“I never remember being frightened,” he said. “Just mad as hell going through this with your life on the line and having my guns not firing.”

Folsom and the other pilots had to return to base considering the conditions of their weapons.

Towards the end of the squadron’s tour, the pilots received more experience flying in support of combat operations than they ever did through their training. Later, Folsom and his squadron had found themselves above another bomber formation. The bombers had already attacked and were returning home when Folsom dived down and closed in on the two bombers.

“I closed in on two Japanese bombers, one of which was directly in my sights and I shot him down,” Folsom said. “I pulled over to the side and I shot down the other one. It was just like a training exercise.”

Eventually, Folsom was completely out of ammunition and flew back to base. The Japanese fighter planes escorting the bombers closed in on Folsom. Folsom found himself in a dogfight without any means of defense. His plane was shot multiple times, but he still managed to escape and make it back to base.
Folsom said that wasn’t the only time he found himself in a dogfight without ammunition. On one occasion, Folsom was attacked by approximately six Japanese fighter planes, which damaged his plane and wounded his left leg.

After his three-month tour in Guadalcanal he was transferred to Samoa, ending his time with VMF-121. During Folsom’s time with VMF-121 he was awarded the Distinguished Flying Cross and the Purple Heart for his actions in Guadalcanal. In total, he shot down two Japanese Betty Bombers and one Japanese fighter plane. He continued his career in the Marine Corps and served nearly 18 years, retiring in 1960 as a lieutenant colonel.