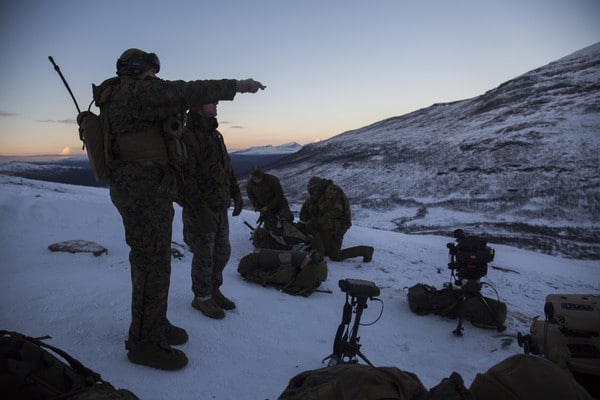 Northern Screen is a bilateral exercise that includes cold-weather and mountain-warfare training between MRF-E Marines and the Norwegian military, Oct. 24 to Nov. 7, 2018.

“A lot of what we do as joint terminal attack controllers is structured off of a NATO standard and by us communicating with our Norwegian allies we’re overall increasing our ability both as Americans and a united force on how we do our procedures,” said Sgt. John C. Prairie II, a Joint Terminal Attack Controller for MRF-E. “It’s making us more tactically and technically proficient.”

“With cold-weather training and the gear, one of the biggest downfalls we have is that electronics drain a lot quicker,” said Prairie.

To mitigate such effects Marines cycle through gear more often to keep electronics charged and minimizing use to conserve energy.

Arctic conditions not only affect gear, but also Marines. They must adapt and train to overcome environmental challenges and succeed in missions without injury.

“The cold-weather predeployment training has really helped out the Marines and really prepared them for what we’re doing out here,” said Prairie. “I feel that everything has gone very smoothly, we’ve definitely improved our efficiency both with our gear setup, break down, our communications with the aircraft and the processes with the Norwegians. I think we’ve done a really good job of building up our ability here.”

This opportunity is a vital asset to train with other nations in environments unlike those in the U.S. This type of training improves NATO capabilities in a non-combative environment to be prepared for any challenges our Allies might face.

Peru and US Navy Celebrate a Successful DESI Deployment