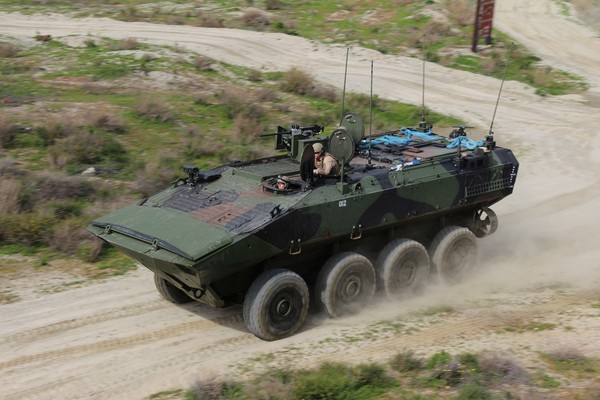 At its core, any Marine Corps New Equipment Training Team is responsible for—as the name suggests—arming Marines with the knowledge and skills they need to operate and maintain new equipment to ensure Marines’ future success on the battlefield. When new equipment is fielded, the NETT provide the initial training to experienced legacy system operators and maintainers to help get them acquainted with the new system in the shortest time possible.

When the new system is the Amphibious Combat Vehicle—game-changing not only in the amphibious capabilities it provides to Marines, but also in that it’s replacing a nearly 50-year-old legacy system—the NETT are in a unique position to bridge the gap between the past and future of amphibious combat in the Corps. Currently, most new equipment training teams are comprised of civilian subject matter experts from Industry, the ACV NETT is comprised primarily of amphibious assault Marines who are able to apply their experience and expertise in operating and maintaining the legacy vehicle to operating and maintaining the new one.

“It’s pretty much 100 percent preparation for the next evolution,” said Staff Sgt. Kevin Wheeler, lead operational instructor on the NETT, of his team’s role. “All of us here on the NETT have years of experience operating the legacy [Assault Amphibious Vehicle]. I think that our collective experience and influence is important, especially in informing the future of our community. That’s our number one job.”

Though the NETT falls under the Virginia-based Advanced Amphibious Assault program office at Program Executive Officer Land Systems, the office responsible for acquiring and fielding the system, the team itself is housed at the Amphibious Vehicle Test Branch at Camp Pendleton, Calif., maximizing the team’s ability to spend time on and become proficient with operating and maintaining the vehicle.

To aid Marines’ transition from the legacy to the new platform, the NETT faces the challenge of infusing old practices into new Standard Operating Procedures and Tactics, Techniques and Procedures for the ACV.

“During the operational assessment, we realized that some of the tactics we’re used to with the AAV don’t work with the ACV,” said Wheeler. “We’re taking into account our old doctrine with the AAV, and seeing how some of those tactics, TTPs and SOPs can translate to the ACV [to make the transition easier for Marines].”

On the vehicular maintenance side, NETT Marines also help design the maintenance course. Currently, the team is busy helping the program office prepare for a four-month logistics demonstration—a comprehensive event evaluating the maintainability and sustainability of the vehicle—scheduled for this fall.

While the NETT’s main role is training Marines on maintaining and operating the ACV, the team also licenses drivers and, as operators of the vehicle, are integral participants in the rigorous operational, logistical and evaluative vehicle tests initiated by PM AAA. Having experienced amphibious assault Marines on the NETT has been extremely beneficial to the program office, particularly during operational assessments and testing.

“The Marines have assisted us greatly with understanding how the amphibious community operates, especially on water,” said James Aurilio, Manpower, Personnel and Training lead for PM AAA. “Operating a land vehicle in water is a unique experience, and they brought that experience with them. There’s a lot about doing that that, those of us who don’t do it would never understand or wouldn’t think to ask [during testing]. They’ve been stellar and have helped us out a lot.”

Multi-purpose Canine retires from the MARSOC

A Short History of NATO