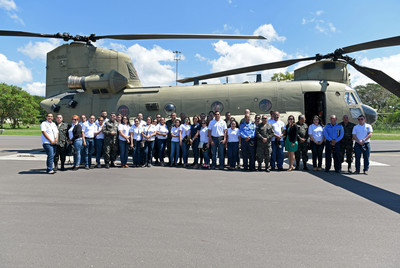 More than 40 students from the National Defense College in Tegucigalpa visited Soto Cano Air Base, Oct 25.

The occasion intended to show new students the installation to help them understand the role of the base not only in Honduras but throughout the Central American region.

Capt. Liza Flint, Joint Task Force-Bravo Protocol Director, said their presence at the base will help them understand the importance of SCAB and its relationship to growing Honduran national defense as they continue with their military education.

During their visit, students received a command and civil affairs brief explaining the various missions and capabilities of the units at SCAB. Unlike other visits that utilize an interpreter and English slides, these slides were in Spanish, briefed in Spanish to facilitate a richer understanding of the mission and priorities.

“It was beneficial because 31 of their students are civilians who hardly ever have any contact with the US military and do not understand command relationships,” said Iris Medina, J9 civil military operations specialist. “It also broadened their horizons as to what are the roles and capabilities JTF-B has in order to respond to a national emergency/disaster.”

In addition to the briefs, individuals assigned to the 1-228th Aviation Regiment gave the students a tour of a various static displays, including the HH-60 MEDEVAC, UH-60 Black Hawk and CH-47 Chinook, explaining the aircraft and aircrew capabilities and answering questions about their missions.