Multi-purpose Canine retires from the MARSOC 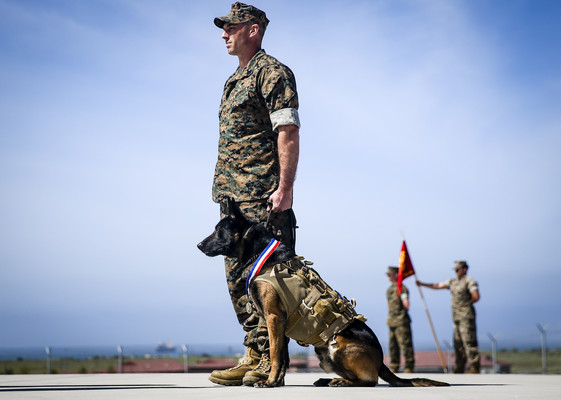 For an average service member, it takes an obligation of 20 years to retire from the military. For their furry four-legged counterparts, it takes over 30 years to accomplish the same goal in dog years of course. Marine Corps working dogs date back to November 1, 1943, during World War II when 1st Marine War Dog Platoon out of Camp Lejeune, North Carolina attacked the beach of Bougainville, Solomon Islands.

“A dog handler is around for about five years,”  said U.S. Marine Corps Staff Sgt. John Koman, multi-purpose canine handler, Marine Special Operations Command, “around the same time as them leaving we try to retire their dog.”

Roy is one such multi-purpose canine with MARSOC, and Koman just so happens to be his handler. On March 29, 2019, the command held a formal retirement ceremony to honor Roy’s five years of faithful service as a specialized force multiplier within the special operations world. After spending 16 weeks developing skills in explosives detection, tracking, controlled aggression, Roy’s amphibious capabilities, such as water insertion and extraction techniques, prepared him to serve in combat. For this accomplishment, Roy received the Military Working Dog Service Award, an award presented to working dogs and MPCs that deploy into combat.

As a Marine receives a ceremony after 20 years, MARSOC conducts the same for MPCs. Once the MPC retires, it is put up for adoption and given priority to the owner. According to results from recent data from the Department Of Defense Military Working Dog Adoption Program, more than 90 percent of military working dogs and MPC’s adopted by their handlers.

“The handler and dog have been through so much together,” said an unnamed MPC master trainer with MARSOC.  “It’s a no brainer for the dog to go to the handlers.”

Before Roy was ready to transition into civilian life, the unit was required to ensure that there are no signs of aggression towards humans and animals. After this assessment, Koman was able to proceed in filing the necessary paperwork for adoption.

“When I first saw him I knew he was the dog I wanted,” added Koman, “it’s just surreal that he’s officially mine today!”

When asked about his and Roy’s plans for the future, Koman stated that he plans to give Roy the most relaxing life possible.