This report originally published at dvidshub.net (DVIDS) and is reprinted in accordance with DVIDS guidelines and copyright guidance.

Guards at the front gate Boone National Guard Center have had a little more company during the day since several Kentucky National Guard Soldiers have been put on orders to check temperatures of the incoming workers and merchants.

To keep in line with the governor’s mandate for Healthy at Work measures, checking employees temperatures before arriving at work has become a must.

For two of the Soldiers you’ll see upon arrival to Boone National Guard Center, taking advantage of this opportunity to aid in the fight against COVID-19 has been a family affair. 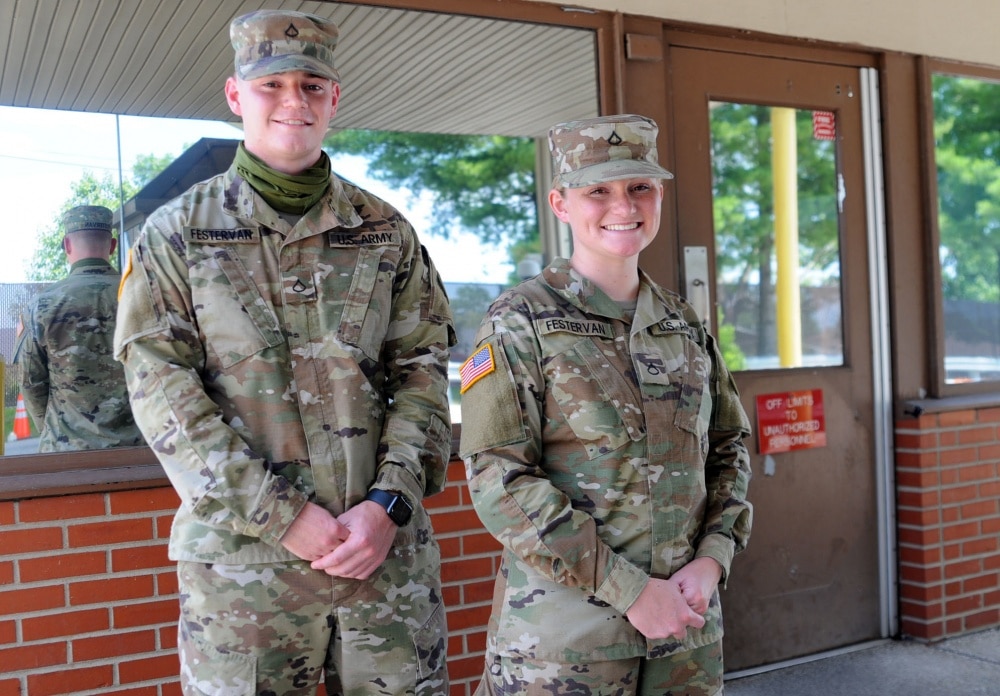 Twin brother and sister, Private First Class Lakin and Logan Festervan are medics with Headquarters and Headquarters Battery, 1st Battalion, 149th Infantry. They both recently graduated from basic training and their Advanced Individual Training, and have been working at the front gate checking temperatures of those working on Boone National Guard Center. (U.S. Army National Guard photo by Staff Sgt. Benjamin Crane)

Twin brother and sister, Private First Class Lakin and Logan Festervan are medics with Headquarters and Headquarters Battery, 1st Battalion, 149th Infantry. They both recently graduated from basic training and their Advanced Individual Training, and have been working at the front gate checking temperatures of those working on BNGC, an opportunity presented to them from their readiness non- commissioned officer.

“He (Sgt. 1st Class Matthew Ashley) texted me personally and asked if I wanted to help,” said Logan. “At first I was hesitant, but I’m glad I agreed to do it. I’ve been working here for about six weeks now and I’m enjoying it.”

It was sister Lakin who was more eager to work full time over the summer on orders for the guard. She was working at a fast-food restaurant in their hometown of Bardstown, Ky., and decided she would be better off working for the Guard.

“I was working at Lee’s (Famous Recipe Chicken restaurant, in Bardstown) when Sgt. 1st Class Ashley texted us and asked if I wanted to do it, said Lakin. I thought to myself, ‘yeah, I’d rather do that’, so here I am!”

The young Festervans haven’t been able to attend an official drill weekend since they returned to Kentucky due to the pandemic, so getting a chance to work at the front gate gives them a chance to meet a lot of people and get to know those in the Kentucky Guard.

Getting to work together has been a fun opportunity for both of them. Like in basic training, having a familiar face helps out in an unfamiliar setting.

“There are times I just don’t want to talk to other people, but I always talk to my sister no matter what,” added Logan.

The pair went to Fort Sill, Ok., together for basic training and then to Fort Sam Houston San Antonio, Tx.

They have an older brother also in the KYNG, Dalton, who led way for them joining. He enlisted just a few years before them and allowed the other two to see what the Guard was all about.

Lakin may be leaving Logan behind for school, but she will be joining Dalton who is a senior at EKU.

“It’s relieving that I’m going to college with my older brother, said Lakin. I don’t know a lot of people at EKU so it will be nice to see a familiar face around.”

As for Logan, he will be without either sibling for his freshman year and even looks forward to the break from them.

“I’m very excited to go to college and happy to be away from my sister for the first time ever,” he laughed. “Considering we’ve been by each other’s side all through grade school and seeing each other pretty much every day, it’s a chance to break away and to be my own self.”

The two will be working at the front gate until their orders are up in August then will be preparing to start their college career.