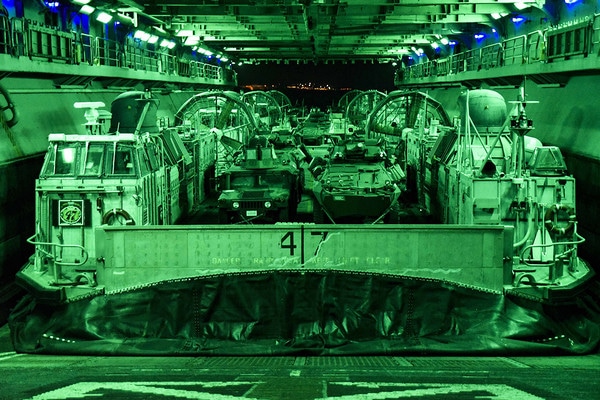 Amphibious warships must be able to sail in harm’s way and provide a rapid buildup of combat power ashore in the face of opposition. This requires cyber-enabled network Marines to integrate shipboard systems, and provide combatant commanders real-time command and control capabilities.

“Having MCTSSA aboard proved to be an excellent experience,” said U.S. Navy Lt. Blake Reynolds, Wasp communications officer. “They offered increased integration for ship-to-shore movement and proper communications between the Marine Corps and the Navy.”

The 31st MEU, the Marine Corps’ only continuously forward-deployed MEU, provides a flexible and lethal force ready to perform a wide range of military operations as the premier crisis response force in the Indo-Pacific region.

The primary objective for the MCTSSA team was to assist the 31st MEU in integrating tactical command, control, communications and computers—or C4—systems into the afloat environment.

As the MCTSSA Navy Integration team continues to support various MEUs, it is also collecting valuable lessons learned that can be applied on subsequent MEU systems operability testing, said Wu.

“The capabilities between the Navy and Marine Corps communication suites were greatly enhanced by the experts who came aboard,” said Reynolds.

“We truly appreciated [the integration] team’s endeavors,” said U.S. Marine Corps 1st Lt. Dakota Deter, 31st MEU communications platoon commander. “We are pressing forward and the Marines have conducted further testing, which would not have been possible without MCTSSA.”

The MCTSSA team thought the testing event was a success as well.

“We were able to develop good working relationships with both the MEU and the ship’s crew,” said Wu. “The more bonds that MCTSSA builds with the operating forces, the greater our impact and the more desirable our services become.”

3D printing in the Marine Corps: An industry of untapped potential