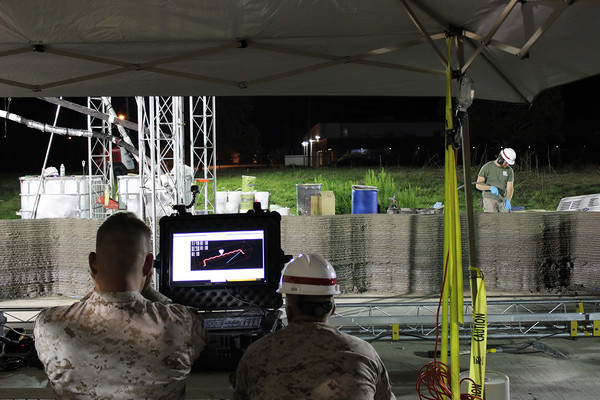 The Marine Corps is leading the way in employing advanced technologies and robotic construction.

Earlier this month, the Additive Manufacturing Team at Marine Corps Systems Command teamed up with Marines from I Marine Expeditionary Force to operate the world’s largest concrete 3D printer at the U.S. Army Engineer Research and Development Center in Champaign, Illinois. As a joint effort between the Marine Corps, Army and Navy Seabees, an expeditionary concrete 3D printer was used to print a 500-square-foot barracks hut in 40 hours.

The Marine Corps is currently staffing a deliberate urgent needs statement and concept of employment for this technology. The results of the field user evaluation will inform future requirements to give the Corps a concrete construction additive manufacturing program of record.

“This exercise had never been done before,” said Capt. Matthew Friedell, AM project officer in MCSC’s Operations and Programs/G-3. “People have printed buildings and large structures, but they haven’t done it onsite and all at once. This is the first-in-the-world, onsite continuous concrete print.”

The team started with a computer-aided design model on a 10-year old computer, concrete and a 3D printer. Once they hit print, the concrete was pushed through the print head and layered repeatedly to build the walls. In total, the job took 40 hours because Marines had to monitor progress and continually fill the printer with concrete. However, if there was a robot to do the mixing and pumping, the building could easily be created in one day, Friedell said.

“In 2016, the commandant said robots should be doing everything that is dull, dangerous and dirty, and a construction site on the battlefield is all of those things,” Friedell said.

The ability to build structures and bases while putting fewer Marines in danger would be a significant accomplishment, he said.

“In active or simulated combat environments, we don’t want Marines out there swinging hammers and holding plywood up,” said Friedell. “Having a concrete printer that can make buildings on demand is a huge advantage for Marines operating down range.”

It normally takes 10 Marines five days to construct a barracks hut out of wood. With this FUE, the Marine Corps proved four Marines with a concrete printer can build a strong structure in less than two days. Ideally, the Corps’ use of concrete printers will span the full range of military operations, from combat environments to humanitarian aid and disaster relief missions.

As the first military services on site in natural disasters, the Navy and Marine Corps are great at providing food and water, but struggle to provide shelter, Friedell said. In many locations, cement is easier to acquire than wood. During humanitarian or disaster relief missions, Marines could safely and quickly print houses, schools and community buildings to replace those destroyed.

“This capability would enable a great partnership with the local community because it is low cost, easy to use, and robotics could print the buildings,” Friedell said. “We can bring forward better structures, houses and forward operating bases with less manpower and fewer Marines in harm’s way.”

The AM Team plans to conduct further testing and wants to get the capability into the hands of more Marines to inform future requirements for cutting-edge technology and autonomous systems.

“Our future operating environment is going to be very kinetic and dangerous because we don’t necessarily know what we’re going into,” said Friedell. “The more we can pull Marines out of those potentially dangerous situations—whether it’s active combat or natural disaster—and place robotics there instead, it helps us accomplish the mission more efficiently.”