Sisson received the Purple Heart for wounds sustained while deployed in support of Operation Enduring Freedom on May 13, 2013. As Sisson arrived to meet with his Staff Non-Commissioned Officer an explosion occurred about 100 meters from where he was standing. Being thrown from his position Sisson lost consciousness for a brief period of time. 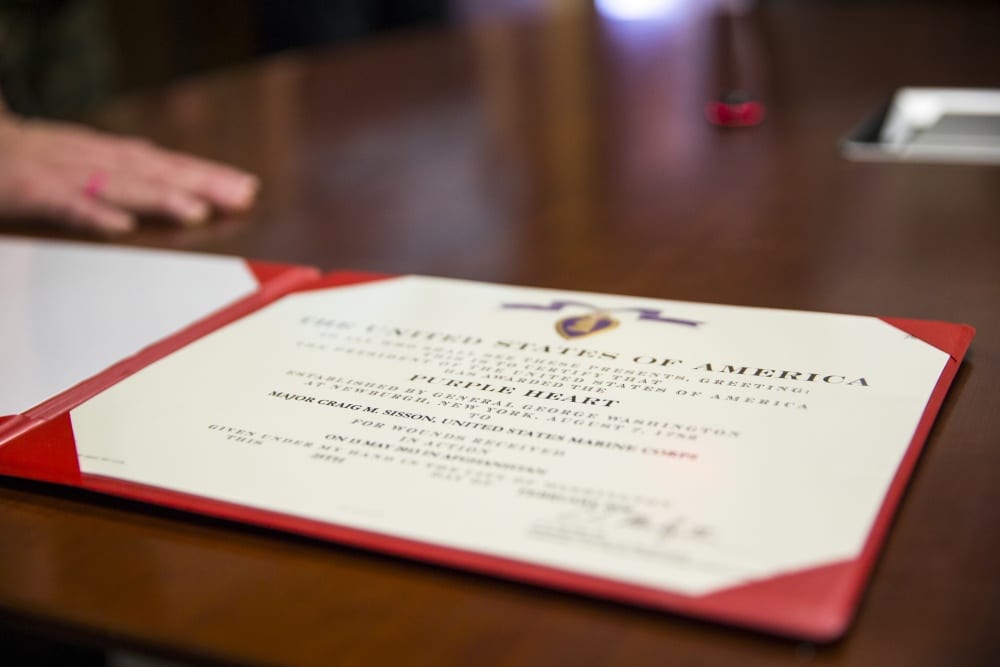 According to Sisson all he could remember from the explosion was the loudest sound he had ever heard.

“As I was being thrown, it felt like I was being crushed by an overpowering force,” said Sisson. “Just telling the story, I’m not trying to make myself sound like a hero. I just did what I was supposed to do and was successful because of my Marines.”

The attack consisted of an explosive laden truck with approximately 250-500 pounds of homemade explosives in the form of a suicide vehicle borne improvised explosive device (SVBIED) and four Taliban fighters armed with grenades, automatic weapons and at least one rocket propelled grenade.

During the incident, Sisson suffered a Traumatic Brain Injury causing migraine headaches, scar tissue in his right inner ear, hearing loss, tinnitus in both ears, balance/vertigo problems and multiple issues with his eyes, which prevent them from ever working properly again.

“Everything you have done since then has been spot on,” said Suggs “I could not have such a high caliber Marine come and replace you. You come out and show Marines how to be a leader.”

Maj Sisson was surrounded by friends, family, and former colleagues during his ceremony.

During his final remarks, Sisson said “May 13th 2013 is a day that I will think about for the rest of my life. It changed the way I have to live my life due to my injuries. However, I do not let those injuries negatively affect how I carry on day to day or ever let myself feel down about what happened because that deployment with those Marines was the most exciting and rewarding time in my life as a Marine and I wouldn’t change a thing.”