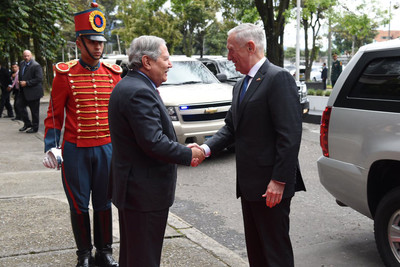 In a statement summarizing the meeting, White said the secretary met with Defense Minister Guillermo Botero.

“The leaders discussed a broad range of defense issues, and the secretary thanked the minister for their country’s regional leadership role as a security exporter,” White said.

The secretary also thanked Colombia for its work regionally to denounce undemocratic actions – especially those in Venezuela and Nicaragua, White said.

The leaders agreed to work together to achieve mutual strategic objectives to address regional challenges, she said.