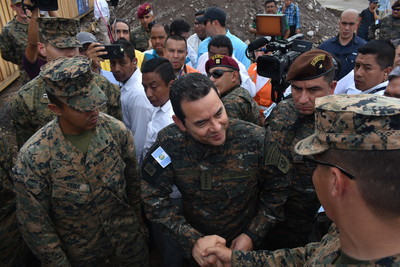 On June 3 of this year, the Fuego volcano, which lies near Guatemala City, erupted sending ash and a pyroclastic flow through homes and neighborhoods. By June 5, 99 people were reported dead, more than 200 were missing, and thousands of Guatemalans were displaced.

The government of Guatemala asked for assistance from the U.S. government, and in short order Special Purpose Marine Air-ground Task Force – Southern Command deployed a detachment of engineers from the deck of the USS Gunston Hall (LSD 44) in the Caribbean Sea to assist the Guatemalan Army Corps of Engineers.

“Initially, I think they were surprised to see us here, but as we started helping them unload their personal belongings and move them in to their new temporary homes, they knew we were here to support them,” said U.S. Marine Capt. David Andrews, officer-in-charge of Marine Detachment – Southern Partnership Station, attached to SPMAGTF-SC. “Even after the construction of the shelters was complete, we did everything we could to continue to refine and improve the site for them, either through repairs or enhancements like ramps to facilitate handicap access to their homes or awnings so they had extra shade and cover from the rain.”

The Marines and Guatemalan soldiers worked shoulder-to-shoulder for 80 hours a week to make the residents’ home away from home as comfortable as possible.

“Considering the initial challenges of our integration such as the language barrier and culture shock, our ability to adapt and the commitment of both groups to the cause, allowed us to quickly become an effective and cohesive force,” said Marine Cpl. Zachary White, a water purification specialist with the engineer detachment. “Enduring countless hours of intense heat and manual labor alongside our newfound companions only strengthened this bond. It is easy to see the brotherhood and mutual respect that has been cultivated between us.”

Language barriers and cultural differences were not the only challenges the group endured as they built the temporary housing.

“We had to overcome the repetitive nature of the construction process,” said Andrews. “We constructed nearly 200 identical shelters in the same manner during our time here. We had to ensure we remained mentally vigilant to counter fatigue in the repetition of tasks to ensure a safe working environment.”

Through these tasks, the Marines never lost sight of the importance of their work.

“This and similar operations show our ability to respond to any need regardless of circumstance, ” said White. “It portrays our commitment to being a force of readiness beyond combat operations. In the case of this mission, it was critical in creating lasting relationships with our partner nations by demonstrating our willingness to support them in times of need.”

The support the two factions gave each other went beyond the working together on task at hand, and extended to teaching and learning from each other.

“What has left a lasting impression on me is how creative and resilient the Guatemalan soldiers had to be in order to complete their projects,” said Andrews. “Marines take for granted the fairly robust equipment suites and capabilities we bring with us, and we tend to forget that we could still accomplish our mission without it. Operating under these austere conditions where the only tools and equipment we had to use were what we could carry on our backs emphasized how adaptable and truly expeditionary our joint forces can be.”

After months of hard work the Marines say they will remember the warm welcomes and smiling faces vice the destruction and sadness of the natural disaster that brought them here.

“Working with the Guatemalan soldiers, I noticed their abundant enthusiasm, ” said White. “Even though most days were very hot and they all worked more hours of the day than we did, they always seemed to have a good time. Each day they would greet us, happy to work with us.”

While the Marines and soldiers were brought together under dire circumstances, SPMAGTF-SC will return next year to continue the mission of supporting the nation’s partners in Central and South America should hurricanes strike, earthquakes shake, or volcanoes erupt.