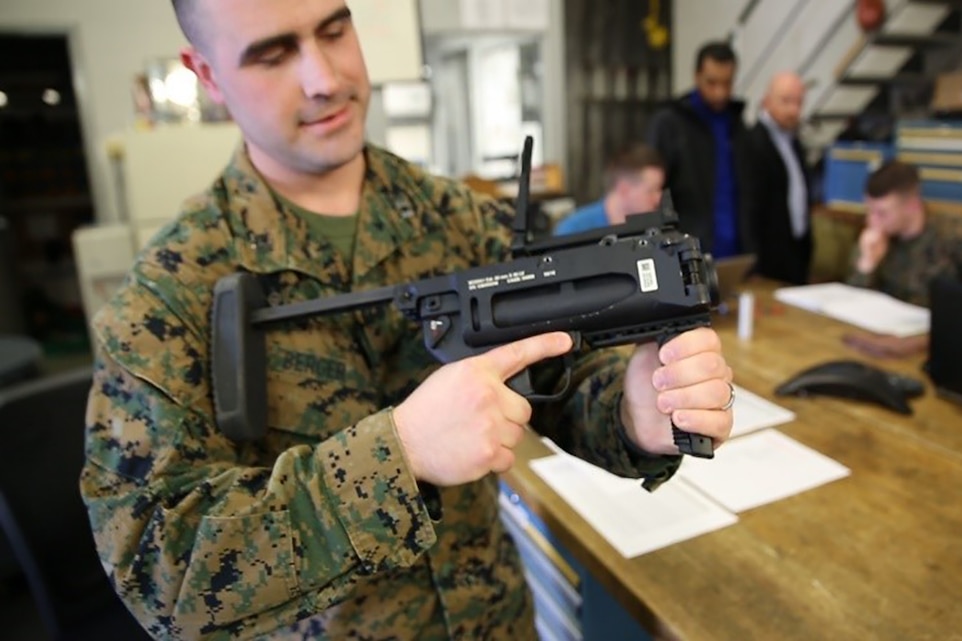 The Marine Corps has begun fielding its new grenade launcher.

The M320A1 is a single-fire system that can be employed as a stand-alone weapon or mounted onto another, such as the M27 Infantry Automatic Rifle. The weapon system will enable Marines to engage adversaries day or night.

“The M320A1 is a 40-millimeter grenade launcher intended to replace the M203A2 currently used by the Marine Corps,” said Capt. Nick Berger, Marine Corps Systems Command’s project officer for the M320A1. “It is a weapon designed for the infantry fire team grenadier.”

The week began with classroom training where Marines learned to maintain and operate the system. Participants learned to assemble, dissemble and troubleshoot the weapon. Marines also participated in live-fire exercises that enabled them to configure, shoot and test various other aspects of the system.

“I think it’s great that they allow some of the infantry units to get their hands on the weapon, learn more about it and even shoot it.” Lance Cpl. Leondra Begay

“They seemed to learn a lot about this new weapon,” he said. “They were really engaged and asked a lot of questions.”

Prior to the NET, the program office solicited assistance from MCSC’s Advanced Manufacturing Operations Cell, enabling MCSC to field the M320A1 ahead of schedule.

AMOC serves as a 24/7 help desk for Marines who need assistance with 3D printing and other manufacturing solutions. Berger approached AMOC about 3D printing a hammer strut tool used to remove the trigger from the M320A1.

“I sat down with Capt. Berger, and he gave me a copy of the tool,” said Capt. Matthew Audette, AMOC’s project officer. “I recreated the tool and made changes to the design to adhere to changes they wanted incorporated.”

As Audette explained, manufacturing the tool traditionally would have taken more than 300 days. While the manufacturer is still required to produce the parts, the program office preferred to expedite this process to field the system more quickly. AMOC produced a 3D-printable version in just a few hours.

The cell printed dozens of hammer strut tools and dummy rounds to be fielded with the grenade launcher for the system’s fielding.

“Without AMOC’s assistance, Marines couldn’t have maintained the system if it broke and [the Program Manager for Infantry Weapons] would have had to limit the number of weapons we put in the hands of Fleet Marines,” said Berger. “Thanks to AMOC, more than a dozen infantry battalions, [School of Infantry East], [School of Infantry West] and The Basic School will all receive M320A1s this fiscal year.”

During the NET, Gunnery Sgt. Jason Wattle, squad advisor for the Infantry Small Unit Leader course at SOI-E, raved about the advantages of the M320A1. He said the system is versatile yet simple and easy to handle.

“Reloading it and unloading it are easy compared to other systems we’ve had in the past,” said Wattle.

Users load and unload the M320A1 from the side of the weapon rather than from underneath it, as was the case with the legacy system. This is a major advantage because the breach of the weapon is clearly visible and the shooter can more easily load while in the prone—or lying down—position, said Berger.

“Additionally, if the Marine experiences a misfire and the round must be removed from the barrel, it is safer to have the barrel release from the side and retain the ammunition than to have it release and potentially fall to the ground [from underneath],” added Berger.

Lance Cpl. Leondra Begay, of 1st Battalion, II Marine Division Bravo Company, agrees the weapon is an overall improvement from the M203A2. She and other participating Marines appreciated the opportunity to familiarize themselves with the M320A1.

“I think it’s great that they allow some of the infantry units to get their hands on the weapon, learn more about it and even shoot it,” said Begay. “Some people who sat in on the class can then teach that information at the small-unit levels.”

Berger said the M320A1 should be completely fielded to infantry Marines in fiscal year 2021. Full Operational Capability is slated for the fourth quarter of fiscal year 2024.