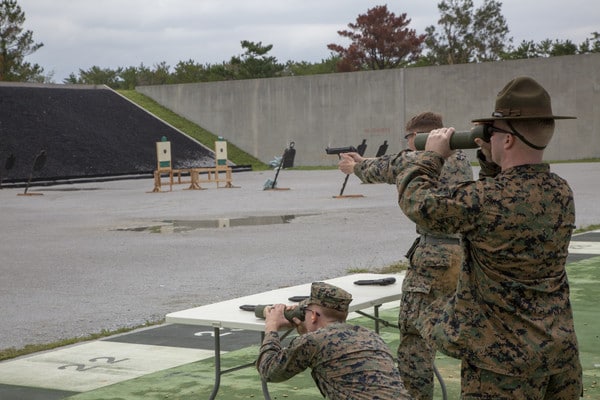 The competition allowed Marines stationed in Japan to test and enhance their shooting abilities.

“The concept of every Marine a rifleman goes back to our basics,” said Sgt. Christian Lee Burdette, an ordinance maintenance chief with Marine Corps Installations Pacific. “We learn basic infantry skills before we learn our military occupational specialty. Every Marine in general has the capabilities to engage any threat with a weapon. With this training, it provides that confidence for a Marine to engage effectively.”

The first day of the competition included a brief morning class to brush the competitors up on their marksmanship knowledge followed by competitors zeroing their rifles. Zeroing is the process of calibrating the rifle combat optic, so the weapon is accurate to where the shooter is aiming. The shooters’ zero is essential, as a faulty zero can disrupt a shooters’ ability to hit their target.

The following week allowed the shooters to practice the various courses of fire. To complete certain courses, the shooters were forced to shoot with their off-hand and eye.

“It puts you into unknown situations, instead of just shooting on a flat range and known distances,” said Sgt. Shane Holum, an emergency service crew chief with MCIPAC. “You have multiple targets and you are shooting and moving. You have to work through problems and malfunctions.”

The final week was for score. All of the shooters’ shots were marked and recorded. Marines were able to compete as an individual, a team, or both. Each shooter had to complete the standard Marine Corps rifle and pistol qualification course along with other courses. The additional courses required shooters to fire and maneuver obstacles, and switch weapons while engaging targets at different distances.

Sixteen teams competed on Dec. 13 in a rifle and pistol competition. To enter and compete as a team, each team must include four shooters. A team must have an officer and a first time shooter. The first time shooter must be at least a noncommissioned officer.

“Any command that is stationed on Okinawa or mainland Japan can come out to the competition,” said Staff Sgt. Stephen Ferguson, an instructor and competitor for the Marine Corps Shooting Team. “You can bring as large as a team as you want, or bring a single shooter. Either way, you can come out and compete.”

The Marine Corps Base Camp Butler’s team won the team rifle competition. The Communication Strategy and Operations Company on Camp Hansen won the team pistol competition, the same day the unit became officially activated. On Dec. 14, the MCB rifle team was presented with the Calvin A. Lloyd Memorial Trophy, and the CommStrat pistol team was presented with the Shively Trophy.

“Annual qualification is once a year,” said Sgt. Cameron Patrick, an instructor and competitor for the Marine Corps Shooting Team. “Shooting is a very perishable skill so we want you to not just do the qualification, but to try and get out and practice on your own time. Actually refine your skills by yourself. Don’t wait for that one year to come around.”

The top 10 percent of shooters are invited to participate in the United States Marine Corps Marksmanship Championship Competition in Quantico, Virginia, in April 2019. From there they will be evaluated to see if the individual has the qualities of becoming a member of the Marine Corps Shooting Team, according to Patrick.

The Far East Competition is held annually on Okinawa. Marines that want to participate are encouraged to sign up early as slots fill up quickly.