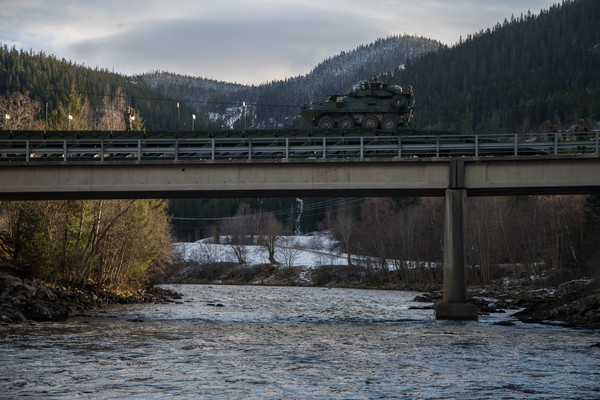 U.S. Marines with 2nd Marine Logistics Group-Forward built a bridge Oct. 29, 2018, during the largest NATO exercise in more than 16 years. The Exercise Trident Juncture 18 provided a unique opportunity for Marines to train with other NATO and partner forces. With more than 50,000 troops from 31 nations participating in the exercise, Marines strengthened transatlantic bond in a dynamic and challenging environment.

A unique capability the 2nd MLG provided to the II Marine Expeditionary Force, who is deployed to Norway for the exercise, was a bridge company that’s under 8th Engineer Support Battalion. Their mission provided general engineering support to the force with employing standard bridging to enhance mobility.

“Gap crossing is a critical skill that engineers are tasked to accomplish,” says Capt. Jeffry Hart, the detachment officer in charge for 8th Engineer Support Battalion. “Being able to rapidly assess and breach a gap takes a lot of planning and coordination between all elements of the Marine Air-Ground Task Force and is always a challenge.”

Some of the challenges the bridge company overcame during the exercise were due to the austere environment of Norway. According to Hart, the road leading up to the bridge is narrow with steep drop offs on each side, which complicated the transportation’s movement. The bridge also iced over during deconstruction, creating a safety hazard for those Marines and Sailors working around the bridge.

“This created a logistical challenge for staging and employing our bridge,” said Hart. “The Marines quickly adapted to the situation and accomplished the mission. The bridge was kept in pristine condition and was ready to use for our operation.”

Marines and Sailors swift actions helped this construction validate the most important aspect of the exercise for the U.S. Marine Corps, which is the relationship Marines built with NATO Allies and partners and Norwegians hosts, according to U.S. Marine Corps Lt. Gen. Robert G. Hedelund, the II MEF commanding general.

“We have been reinvigorating our effort to know northern Europe better,” said Hedelund. “Should we have to come back here in extremis, the relationship with NATO is an extremely important part of that.”

Building a bridge over a river, halfway around the world from the home station, was not the only challenge. It was also a battle of logistics, which is why the Marine Corps’ relationship with Norway is important. To assist in this battle and foster the close friendship, the Marine Corps turned to another capability that was available in this exercise. Since 1981, the Marine Corps has prepositioned equipment and supplies in Norway to enable a quicker response in times of crisis or contingency. The program, called Marine Corps Prepositioning Program – Norway, has been used to support logistics for combat operations like the war in Iraq. During Trident Juncture 18, the Marines utilized the concept by withdrawing equipment from caves to build the bridge.

The prepositioning program in Norway enabled Marines access to prepositioned equipment and supplies to enable a quicker response in times of crisis or contingency.

“I believe that logistics are the Achilles heel of any operations in the field,” said Navy Adm. James G. Foggo, the commander of Allied Joint Force Command Naples and the commander of Naval Forces Europe and Africa. “When we talk about the maritime domain, the land component, the air domain, cyber and space… we now have a sixth domain to talk about and that is logistics.”

The overall exercise, to include the bridge building construction, helped II MEF test and validate their warfighting capabilities across the warfighting domains, better preparing them to help support NATO Allies and partners.