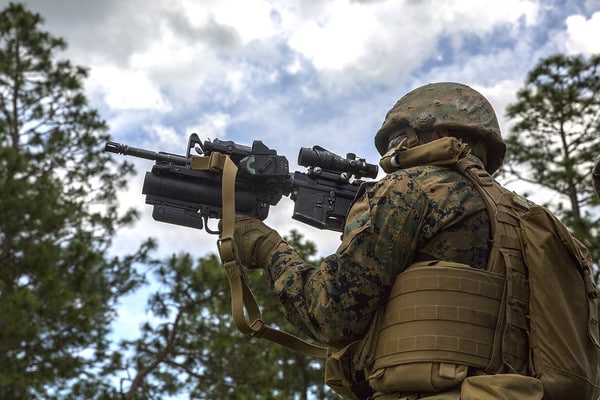 The Marine Corps plans to introduce a new weapon intended to enhance the lethality of infantry Marines on the battlefield.

The M320A1 is a grenade launcher that can be employed as a stand-alone weapon or mounted onto another, such as the M27 Infantry Automatic Rifle. Scheduled to be fielded in fiscal year 2020, the system will give fleet Marines the ability to engage with enemies near and far, day or night.

The functionality of the M320A1 makes it unique, said Hough. Its ability to be used as a stand-alone or in conjunction with a firearm should help warfighters combat enemy forces. The weapon will replace the M203 grenade launcher, currently employed by Marines.

“The mounted version of the M320A1 is a capability we’re currently working on so that Marines have that option should they want it,” added Hough.

Before the Marine Air-Ground Task Force receives the M320A1, the Corps must draft technical documents for the weapon. These publications provide Marines with further information about the system.

The first evaluation was a Level of Repair Analysis, or LORA. A LORA determines when a system component will be replaced, repaired or discarded. This process provides information for helping operational forces quickly fix the weapon should it break.

The LORA establishes the tools required to perform a task, test equipment needed to fix the product and the facilities to house the operation.

“It’s important to do the LORA now in a deliberate fashion so that we don’t do our work in front of the customer,” explained Hough. “And it ensures the system they get is ready to go, helping them understand the maintenance that must be done.”

The second evaluation was a Job Training Analysis, which provides the operational forces with a training package that instructs them on proper use of the system to efficiently engage adversaries on the battlefield.

“This process helps us ensure this weapon is both sustainable and maintainable at the operator and Marine Corps-wide level,” said Capt. Nick Berger, project officer in Infantry Weapons at MCSC. “It sets conditions for us to field the weapon.”

Sustainability is a key factor in any systems acquisition process. The goal of the LORA and Job Training Analysis is to ensure the operator and maintenance technical publications of a system are accurate, which reduces operational ambivalence and improves the grenade launcher’s sustainability.

The LORA is an ongoing process that continues throughout the lifecycle of the M320A1 to establish sustainability, said Hough. After fielding the M320A1, the Corps will monitor the system to ensure it is functioning properly.

During this time, the program office will make any adjustments and updates necessary.

“We’re looking to have the new equipment training and fielding complete prior to fourth quarter of FY19 to ensure they can be used and maintained properly once they hit the fleet,” said Berger.

The analyses, which occurred over the course of a week, were no easy task.

“This was an extensive and arduous process,” explained Hough. “We scheduled three days for the LORA—all day—so you’re looking at about 24 hours of work for the LORA. And that doesn’t include reviews, briefs and refinements to the package.”

However, at the end of the week, Hough expressed gratitude for all parties involved in the M320A1 analyses, which he called a success. He said the tasks could not have been completed without the help of several key individuals.

“I will tell you what’s noteworthy is working with our contract support, the outside agencies and the deliberate efforts by our team—specifically Capt. Nick Berger and Steve Fetherolf, who is a logistician,” said Hough. “Those two have made a significant effort to get this together and move forward.”

Berger also expressed pride about the accomplishments of the analyses.

“This week has been a success,” he said. “We got the system in Marines’ hands, worked out the kinks and began to understand how we’re going to use this moving forward.”

Coast Guard Offloads 27,000 Pounds of Cocaine at Base Miami Beach

The hunt is on: Cyber group hosts exercise to evolve operators