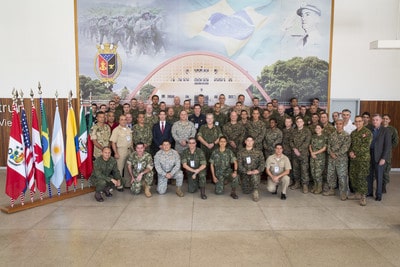 A country on the coast of South America has been struck by a devastating hurricane, leaving a large number of people without water, food or shelter. Fortunately, the maritime services from several countries in the region were conducting training nearby, and are able to respond to an international request for help.

That’s the scenario U.S. Marines and Sailors, along with military planners from nine other countries, recently worked through in Rio de Janeiro as part of UNITAS Amphibious 2018, Aug. 20-24.

The country of “Amarelo” used in the exercise scenario doesn’t exist, but it can represent any of the countries in the Western Hemisphere regularly threatened by natural disasters. In a time when resources are finite, no single country has the means to tackle a large-scale natural disaster on its own. It will take multiple nations working together to save lives and prevent further suffering.

Creating the interoperability necessary for those countries to successfully work together was the goal of this year’s UNITAS Amphibious, according to Brazilian Naval Infantry Rear Adm. Nelio de Almeida, the commander of Brazil’s Marine Doctrine Training Command. The partner nation militaries working together need to establish common processes, command and control methods, and avenues for exchanging information.

The knowledge gained and the processes put into place will set the stage for next year’s iteration of UNITAS Amphibious, when the participating countries actually take to the sea to conduct a humanitarian assistance and disaster relief field training exercise.

Over the course of the last year, the Marines of U.S. Marine Corps Forces, South have worked with partner nations to create a multinational maritime task force, bringing together personnel and equipment from multiple nations to sail on naval vessels from multiple nations as a way to pool resources and respond to natural disasters and humanitarian crises in the region. This year’s UNITAS Amphibious is seen as building block for that task force, driving military planners from across the Western Hemisphere to plan through how an actual multinational task force would operate while responding to a natural disaster.

“I think a critical first step is working the details of the concept against a detailed scenario,” said U.S. Marine Maj. Gen. David G. Bellon, the acting military deputy commander for U.S. Southern Command. “By working in this way, the professionals from each country are able to form an objective opinion about how such a multinational capability may contribute to the overall security and stability of our region and also provide relief to those who are suffering.”