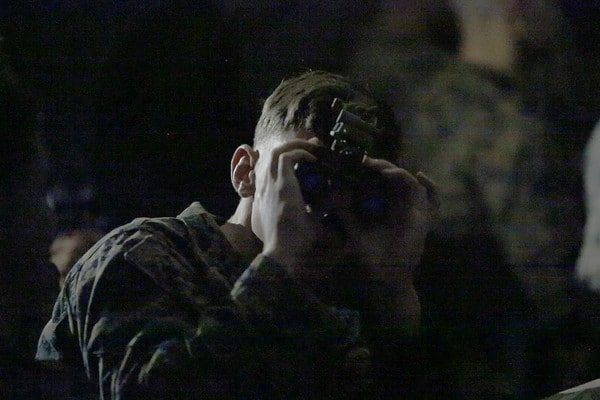 “We have employed a bridge capability to give Marines the best gear right now available in the commercial marketplace,” said Lt. Col. Tim Hough, program manager for Infantry Weapons. “A final procurement solution will allow a larger pool of our industry partners to bid on the program.”

Army/Navy Portable Visual Search devices, or AN/PVS, have been employed by the military since at least the 1990’s and upgraded with next-generation systems as funding and technology became available.
The move to the SNBVG is expected to enhance the infantry’s lethality and situational awareness in reduced visibility. It combines two systems: a binocular night vision device and an enhanced clip-on thermal imager.

Marines took delivery of the equipment and learned how to use them last month at Camp Lejeune, North Carolina. Known as NET, the new equipment training entails teaching Marines about the operations, characteristics, maintenance and use of the new devices.

“The lethality that it’ll bring is exponential [sic],” said Cpl. Zachary Zapata, a Marine who participated in the training. “With these new [BNVGs], having the ability to not only use thermal optics along with it, but just the entire depth perception and speed that we can operate in is going to significantly increase, as opposed to what we were able to do in the past.”

The initial buy and follow-on procurement is being funded with Marine Corps dollars as prioritized by the Department of Defense Close Combat Lethality Task Force, which concentrates on the squad-level infantry and is aimed at ensuring close combat overmatch against pacing threats. The SBNVG acquisition strategy is to procure the devices incrementally and concurrently as the Corps looks toward future technologies.

“Right now, we are participating with the Army on their next generation night vision systems, both the Enhanced Night Vision Device-Binocular and Integrated Visual Augmentation System Programs,” Hough said. “We are eager to see the maturation of these capabilities for adoption to improve the effectiveness of our Marines.”

The program office plans on releasing a final request for proposals to procure an estimated 16,000 additional systems on the basis of full and open competition. According to program officials, a draft request for proposals was posted to the Federal Business Opportunities website in mid-November, and closed on Dec. 19, 2018. The Government is currently adjudicating comments and anticipates release of a final RFP in the near future.

Additional fielding of the systems is planned for September 2019. While the devices may eventually make their way to the entire Ground Combat Element, for now the first priority is given to the Marine Rifle Squad, program officials said.

“This program office is committed to bolstering the combat lethality, survivability, resilience and readiness of the GCE,” said Hough.