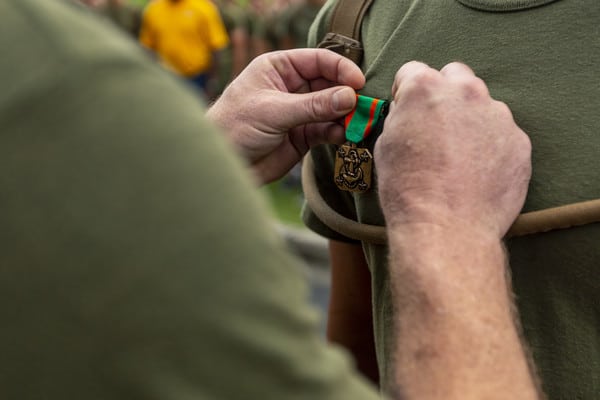 While in Bali, Marmalejo used ingenuity and skills that he learned through Marine Corps training to perform first aid, and he saved two lives-which earned him the Navy and Marine Corps Achievement Medal. He was awarded the medal at MCAS Iwakuni, Sept. 21, 2018.

“We spent 10 days in Bali just hanging out there,” said Marmalejo. “So, for the most part, we were just at the beach, hanging out and having a good time relaxing.”

Marmalejo’s vacation took a different turn on the second to last night of his stay on the island. While traveling to a beach in the area where he was staying, he came upon a traffic accident.

“I ran to the accident, and I basically forgot about everybody else,” said Marmalejo. “I was just focused on the accident.You enter a state of panic, at least from what I remember.”

Upon reaching the accident, Marmalejo quickly assessed the situation and surveyed that there were two injured civilians.

“The female was screaming at the time, and she was bleeding out from her leg,” said Marmalejo. “The male was unresponsive so on the surface it appeared that the female needed a
lot more medical attention. That was my initial thought. I went to work on her at first.”

By assessing the situation and applying lifesaving skills that he learned during basic training and a combat lifesaver course, his Marine instinct was to search for something to use as a tourniquet.

“I was asking for a belt because that was the first thing that came to mind for a makeshift tourniquet,” said Marmalejo. “Nobody was wearing a belt because everyone was wearing board shorts so I used a shirt that I found on the street. I basically ripped up the shirt and just like we learned in boot camp, I tied it two inches above the wound.”

Marines are taught to write the time that a tourniquet is applied on the victim as a means to communicate with first responders. If tourniquets are left on for too long, they can cause more harm than good. Marmalejo did not have a writing utensil so he adapted to the situation and wrote the time with the victim’s blood on her leg.

After administering first aid to the wounded woman, Marmalejo moved on to the injured man who was fading in and out of consciousness with a possible head injury.

“I just looked around for nearby things and found a mug that I put underneath his head, and that’s honestly the best thing I could do,” said Marmalejo.

Marmalejo went on to ensure that the two victims were able to find proper medical treatment and stayed with them overnight until 5 a.m. when he returned to the hostel where he was staying. At the hostel he met back up with Sgt. Derrick Usry, an air traffic controller with
H&HS who was also in Bali and was separated from him the night before.

“When I first saw Marmalejo I was worried, seeing him walk into our room with blood on his shoes,” said Usry. “He explained what happened, and he seemed fine. He was worried less about his emotions and more about the people he helped save.”

Marmalejo went back to the hospital later that day to make sure the victims were alright. In the days after the accident, he kept in contact with the victims’ families and received updates on the woman’s recovery.

Usry, who works with Marmalejo, said that he is proud to work alongside him and his actions were nothing short of extraordinary.

“Cpl. Marmalejo has outstanding character and is constantly looking out for others, even if it means putting aside his self-interests,” said Usry.

Marmalejo is still working at MCAS Iwakuni as an air traffic controller, and he currently serves on the H&HS color guard.