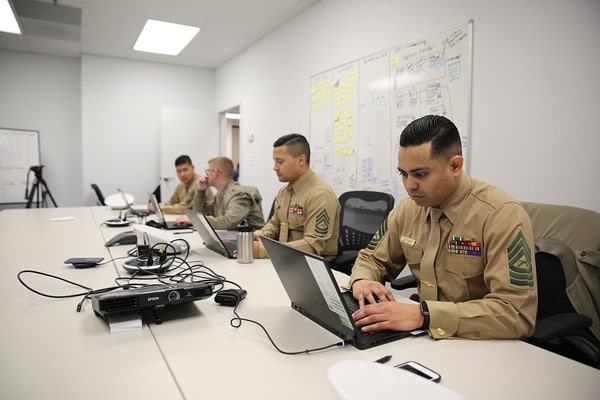 Marine Corps Systems Command has partnered with Marine Corps Recruiting Command to develop a new tool with the goal of making the job of recruiters a little easier. The launch is part of a strategic initiative to modernize the tools and technologies available to the recruiting force.

The Marine Corps Recruiting Information Support System II, or MCRISS II, is a mobile platform that provides Marines with all of their recruiting needs from the moment they meet an applicant to the time they leave boot camp.

MCRISS II features a customizable platform where recruiters can tailor their dashboards to help them perform their daily tasks. They can also access the platform while offline in airplane mode when connections are unreliable. The application uses cloud technology and can be accessed using government-issued cellphones, laptops and tablets.

“The dynamics of having Marines work directly with MCSC software developers from the beginning was invaluable because we were able to adequately describe and display exactly what Marine recruiters wanted in the new system,” said Chief Warrant Officer Christopher Mayfield, MCRISS operations officer for MCRC. “As the project progresses, we have a sufficiently staffed cadre of Marines who gather input from users to keep that line of communication open, so it will help us enhance MCRISS II with more capabilities in the future.”

Recruiters gather the applicants’ personal information, background history, goals and other details to assess if they will meet the standards of a Marine and possibly serve for more than four years. The tool also helps recruiters compare applicants.

“MCRISS II offers greater convenience and helps Marine recruiters maintain their availability and responsiveness, so they can be successful recruiting the next generation of Marines,” said Jason Glavich, MCRISS project Manager in Supporting Establishment Systems at MCSC. “Now that we are using the commercial cloud, our system is more secure, fast and reliable.”

Currently, the MCRISS II team is working on minimal viable product releases that will launch in March. Small capabilities will be released every two to four weeks, so recruiters can receive the benefits of updates to the platform without having to wait the standard time it takes for an entire system to be fielded, Glavich said. The entire rollout will most likely take a little more than 12 months.

“We are leveraging industry best practices and their ability to innovate, and we’re taking those innovations and applying them without having to spend program dollars,” said Glavich. “Because this new technology is more secure and it is built on a low-code platform instead of using traditional computer programming, it allows us to provide recruiters with new capabilities at a much faster pace.”

In the future, the team will use artificial intelligence and new technologies to look at data sets and predict an exact outcome based on previous outcomes and future conditions.

“This predictive analysis will give us a better understanding to determine what’s going to happen, which will help us enhance MCRISS II even more in the future,” said Glavich.

Marines with 1/8 participate in TRAP training