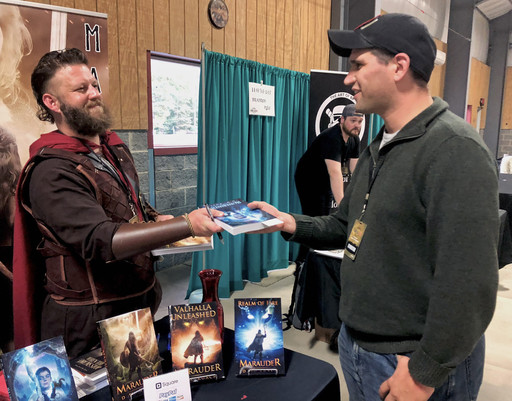 He also worked with the Coast Guard, doing search and rescue missions and anti-drug interdiction out of Monterrey Bay, California. He used all of his experience for material for his books.

“In security, I’ve been shot at. I’ve had people try to stab me. I’ve gotten into lots of fights and take downs,” Roach said. “I hate going into crowded places. I’m definitely a person who enjoys being out in the wilderness.”

He also used the military family experience of his wife, Amanda, to add to the realism behind the fantasy of his characters in his five-novel Vikings series called “Marauder.”

“I come from a Marine family,” Amanda said. They’ve been married 11 years. “My grandmother and grandfather actually met in the Marines. She was Marine in the 1950’s. She was tough as nails. My brother and cousins are also Marines.”

Roach said he researched the history of Vikings, Scandinavian culture and the realities of their lives during that time period.

He said his books reflect his military experience because he doesn’t shy away from dark humor, cursing or the brutality of war. “These are not kids’ tales. They’re brutal. I’m always trying to find the historical curse words, the slang they would’ve used at the time. This is what it was like during that time. That was what real life was like,” he said.
“I started going to re-enactment battles as well,” Roach said. “I got to get into a shield wall. I saw how easy it is for a shield to splinter or for weapons to bend or how quickly things could go wrong if you get flanked or if someone is careless.”

For Roach’s Civil War book, “When the Drums Stop,” he wrote in the footsteps of his ancestor, a low-ranking Union soldier. He drove cross-country and visited the National Civil War Museum and stopped at battlefields for inspiration.

Roach said that anyone in the military who even has an inkling of becoming a writer, whether it be for a novel or for a website should just start doing it.

“Don’t wait for somebody’s permission. Don’t wait for a publication or publisher to tell you you’re good enough because most of them will say, ‘No’ because they want to make sure you’re a sure thing before they even spend a dollar on you,” he said. “Just do it. As I take up more virtual book space, more people are finding me. More people are starting to pay attention.”

Roach started with self-publishing his first few novels but a positive review from a professor of Norse archaeology, he picked up a publisher.

“Just like with the military, if you work hard at it and have that perseverance, eventually it’s going to pan out for you,” he said.