Maintaining the Osprey while Forward Deployed 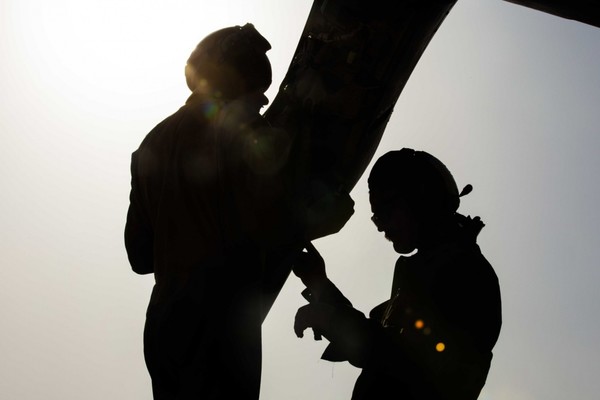 Iraq — During June and July 2018, Marines forward deployed to Iraq with an MV-22B detachment in support of Combined Joint Task Force – Operation Inherent Resolve conducted maintenance on the Ospreys. The maintainers worked tirelessly to ensure the Ospreys were functional and ready to fly when called upon to conduct combat assault transport of cargo, ammunition or passengers.

“We did a lot of removal of hydraulic hard driven units,” said Sgt. Matthew B. Moody, an airframes mechanic with the unit, referring to parts that are responsible for changing the mode of flight from helicopter to airplane. “We also repaired a lot of rotor blades due to sand and gravel wearing them down, we had to ensure those parts were up to standards.”

The mission of the Airframes Department is to conduct composite repairs, body work, and removal and replacement of any hydraulic component of the aircraft.

“As far as maintenance is concerned, most of what we saw were common maintenance events with the aircraft,” said Gunnery Sgt. Andrew L. Sauceda, the avionics staff non-commissioned officer in charge. “We were able to resolve most of the problems we faced relatively quickly thanks to the Marines’ hard work and dedication.”

“The biggest maintenance evolutions we faced here in Iraq were changing five Prop-rotor Gearbox Mast Seals,” Sauceda said, referring to a type of seal that prevents oil from leaking in the gearbox during maintenance ground turns and flight operations. “Typically, those would take a couple days back in the rear. However thanks to the drive and focus of the maintenance department as a whole, along with the help we received from our Army and Air Force counterparts, we were able to complete two changes in one day.”

Although the Marine Corps has conducted operations in Iraq since the early 2000s, the overall mission has changed over time.

“Back then, the mission set was different,” said Sauceda, who had previously deployed to Al Asad Air Base with a different unit. “We were supporting casualty evacuations, whereas now we are supporting the ground troops with whatever they might need.”

For most Marines with the small contingent forward deployed in support of CJTF-OIR, it was their first time being deployed to Iraq.

“Coming to a new environment like Iraq was an eye opener,” Moody sad. “It was a lot of the Marines’ first time being forward deployed so there were a lot of unknown factors that most of us haven’t necessarily worked with before. Working and putting our heads together with the other branches helped us complete the job and ensure the aircraft were ready for flight.”

Darkness falls over the flight line, and the hot air mildly dissipates. Flood lights shine down on the flight line. The day crew heads to sleep, while the oncoming night crew prepares for a full night’s work. The cycle of constantly working Marines is imperative to safe and mission ready aircraft.

Face of Defense: Army Doctor Describes His Rise From Poverty to Follow Dreams