It’s a TRAP! 24th MEU Marines, Royal Marines Commando in Norway train together for search and rescue during Trident Juncture 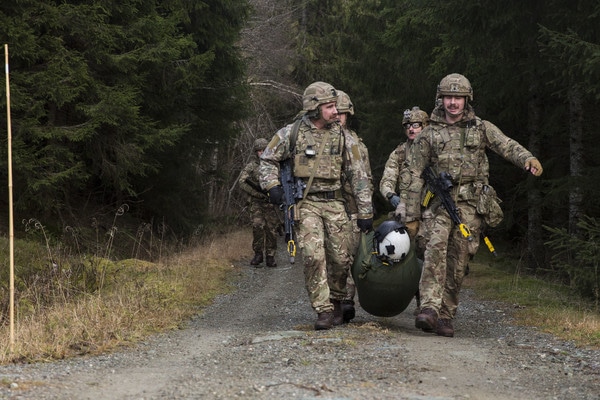 Prior to the Royal Marines’ insertion into the landing zone, a UH-1Y Venom helicopter patrolled the area from the sky, searching for notional enemy combatants. The CH-53Es arrived shortly thereafter and delivered the Royal Marines who were met by members of the Norwegian Home Guard, who were role-playing as the opposing forces.

“It’s been very positive working with U.S. Marines,” said British Lt. Tom Williams, a troop commander with X-Ray Company. “The interoperability has been very effective and we have been able to do a lot of planning with them on a tactical level as well as at a higher headquarters level.”

The Royal Marines were able to maneuver on the enemy location and recover the first isolated U.S. Marine simultaneously.

After the first U.S. Marine was safely evacuated from the landing zone, the Royal Marines began to search for the second U.S. Marine which led them through approximately 500 meters of the steep, dense Norwegian forest.

Once the Royal Marines were prepared to evacuate the second U.S. Marine, the notional enemy attacked from the tree line. Combined capabilities were on full display at this point, as the Royal Marines maneuvered on the enemy and Yeager called for close-air support, which was delivered by the UH-1Y Venom with Marine Light Attack Helicopter Squadron 269. The effective enemy suppression allowed the Royal Marines to deliver the U.S. Marine safely to the awaiting CH-53E.

“Forty Five Commando has spent time on the USS Iwo Jima and Royal Marines and U.S. Marines shared their unique traditions and fighting capabilities with each other,” said Williams. “This training will aid in future interoperability going forward.”