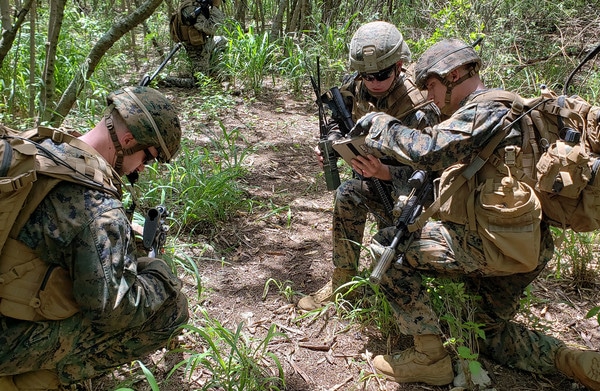 For the last three years, engineers and project officers from Marine Corps Systems Command have descended on the island of Oahu to put new technology to the test.

In the fall, MCSC—along with Marines from the 3rd Marine Regiment and partner organizations from the requirements community—conducted the “Island Marauder” technology demonstration to integrate and evaluate emerging technologies with existing Marine Corps gear to help inform future capability decisions for the Corps.

“We conducted the Island Marauder technology demo to see if mature but leading edge command and control technologies work when we integrate them with our fielded systems,” said Basil Moncrief, Networking-on-the-Move team leader at MCSC. “We also wanted to see what fleet Marines thought about the emerging technology. [Island Marauder] helps Headquarters Marine Corps and the Marine Corps Tactics and Operations Group validate that the emerging technology supports or enhances the latest warfighting tactics and strategies they want to pursue.”

The demonstration included one week of intensive, hands-on field engineering and system integration, and a second week of VIP demonstrations. Most of the tactical command and control—or C2—capability was integrated into a battlefield network controlled through the 3rd Marines’ Networking-on-the-Move Systems. NOTM is a vehicle-mounted satellite communication system that extends C2 for commanders and their staffs while on the move and beyond line of site at the tactical edge.

Developed by MCSC, NOTM has been fielded to all three Marine Expeditionary Forces.

“One of the powerful elements of the Island Marauder demonstration is a challenging tactical scenario that requires insertion of new technology and warfighting approaches while using currently-fielded equipment and fleet Marine operators,” Moncrief said. “The 3rd Marine Regiment gives us extremely useful information during Island Marauder that influences engineering, sustainment and user interface. This, in turn, assists HQMC with advanced concepts and out-year planning.”

During one demo, Marines on the ground used NOTM to simulate calling in air strikes and a medical evacuation—a feat that had not been successfully performed with live aircraft in past demonstrations.

“This year, we brought in some other MCSC programs that have a direct relationship with NOTM,” he said. “For example, the project officer for Identity Dominance Systems-Marine Corps recognized early on that NOTM could be a game changer for that program.”

“When Marines downrange encounter a person of interest, they use IDS-MC to collect biometric data,” said Teresa Sedlacek, lead engineer for Identity Operations at MCSC.

Typically, Marines then have to get to a forward operating base or Combat Operations Center to download the information to receive feedback on submissions, she said. During Island Marauder, the demonstration team successfully connected IDS-MC wirelessly with NOTM, which enabled them to receive data retrieval and feedback almost immediately.

“That’s the kind of thing that’s important to us on the Island Marauder Team because it improves combat capability for other programs and for the Marine operating forces,” Moncrief said.

Other programs and technologies that were part of the Island Marauder demonstration included the Secure Tactical Terminal and secure wireless networking techniques.

“Since the beginning, Island Marauder has been super useful in helping us push the envelope for technology exploitation,” Moncrief said. “As C2 technology continues to accelerate and Marine warfighting strategies adapt to new challenges, we need to show decision-makers some potential match-ups demonstrated together. In this way, Island Marauder enables a better understanding of the near-term possibilities by integrating new technologies with existing capabilities.”

Planning for Island Marauder 2019 is already in progress with the focus on joint C2 and disconnected operations.