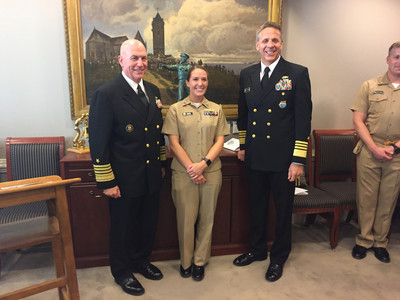 But the customs and traditions of the service going back to John Paul Jones and Stephen Decatur still guide sailors.

The award recognizes the longest-serving surface warfare officer on continuous active duty. Surface warfare is the traditional community within the Navy that employs ships for missions of forward naval presence, sea control and power projection. Surface warfare officers – called SWOs – are the men and women whose training and primary duties focus on operations of Navy ships at sea and the management of various shipboard systems.

“When we are new to the Navy and the sea, we rely on those who came before us to pass down our lore, customs and traditions,” said retired Vice Adm. Lee Gunn, past president of the Surface Navy Association during the ceremony. “In the Navy we have an expression for an experienced and knowledgeable mariner – we call these sages Old Salts. It is the Old Salts who have made it possible for our traditions to be kept alive.”

Seniority is determined by the officer’s qualification date in surface warfare – when they put on the pin. Tidd earned the qualification in June 1980, aboard the guided missile destroyer USS Semmes while serving as main propulsion assistant.

“I would leave with you the notion that this Navy of ours is first and foremost made up of sailors,” Tidd said. “Sailors are men and women who make it their lives to go down to the sea in ships.”

Tidd said he earlier had the privilege of passing the command of the USS Eisenhower Carrier Strike Group to Davidson.

Being recognized as the Old Salt is “a great honor,” Davidson said.

“I am humbled by the opportunity and fate of it all,” he said. “I have to say I scrambled to learn the rules, because I didn’t think I could possibly be the oldest. But it turns out that I am. I will wear it with pride.”

The Navy’s enlisted equivalent of the Old Salt award – the Old Tar – will be named at the Surface Navy Association’s meeting in January.