Good Samaritans from a merchant vessel, with Coast Guard coordination, rescued three men from an overturned vessel over 70 miles off Yap, Saturday.

The crew of the vessel, Frio Mogami, participating in the Automated Mutual Assistance Vessel Rescue System program, recovered the three men, ages 31, 50, and 75, from their capsized, 36-foot sailing canoe.

The men were all wearing life jackets and were in two separate dinghies drifting with their vessel. They also used a registered position indicating radio beacon. 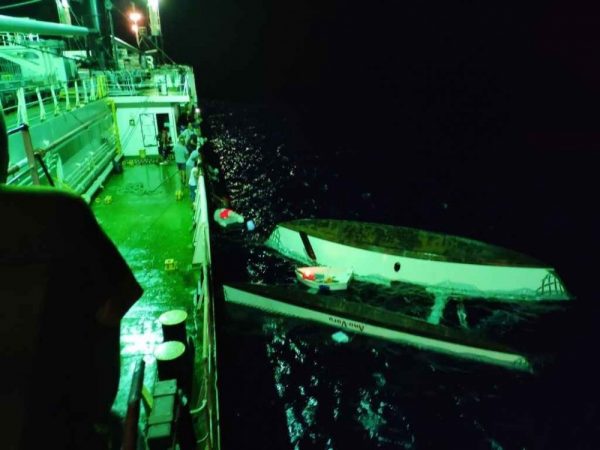 “This is a great example of how our Automated Mutual Assistance Vessel Rescue System, or AMVER program, works in coordination with search and rescue,” said Lt. Charles Cummings, Search and Rescue Mission Coordinator, RCC Guam. “Merchant vessels all over the world making offshore voyages are encouraged to participate in the AMVER program. That information helps in keeping track of vessels across the world and helps dispatch the best possible resources to a vessel in distress in a certain area. Having a properly registered PLB like these men did, helps the Coast Guard locate you more quickly and easily.”

At 8:45 a.m. (CHST) Saturday, Rescue Coordination Center Guam watchstanders received a report from Guam Fire Department of the activated personal locator beacon alert over 70 miles off Gaferut, Yap. RCC Guam Watchstanders were able to contact an AMVER vessel crew in the area who agreed to assist.

The state of Yap requested assistance from Pacific Mission Aviation, who also sent a crew to conduct a flyover of the distressed vessel and drop rations and kits consisting of VHF handheld radios, flares and night time illumination devices.

At 9 a.m. (CHST) Sunday, following their initial rescue, the three men were successfully transferred to the U.S. Coast Guard Cutter Kiska (WPB 1336). The Kiska crew is en route to Guam where the men will meet Guam-based Customs and Border Protection personnel.

The men were reported leaving Guam Thursday morning en route to Yap. Weather on scene is winds 20 to 25 mph with 5-foot seas. No injuries are reported.

The PMA is an evangelical, non-profit mission organization which serves the islands of Micronesia and the Philippines.
The Frio Mogami is a 442-foot Panamanian-flagged containership.