That was the opening statement by Master Sgt. William Jackson, 15th Medical Group superintendent, who spoke before 15th Wing leadership about race in the military. 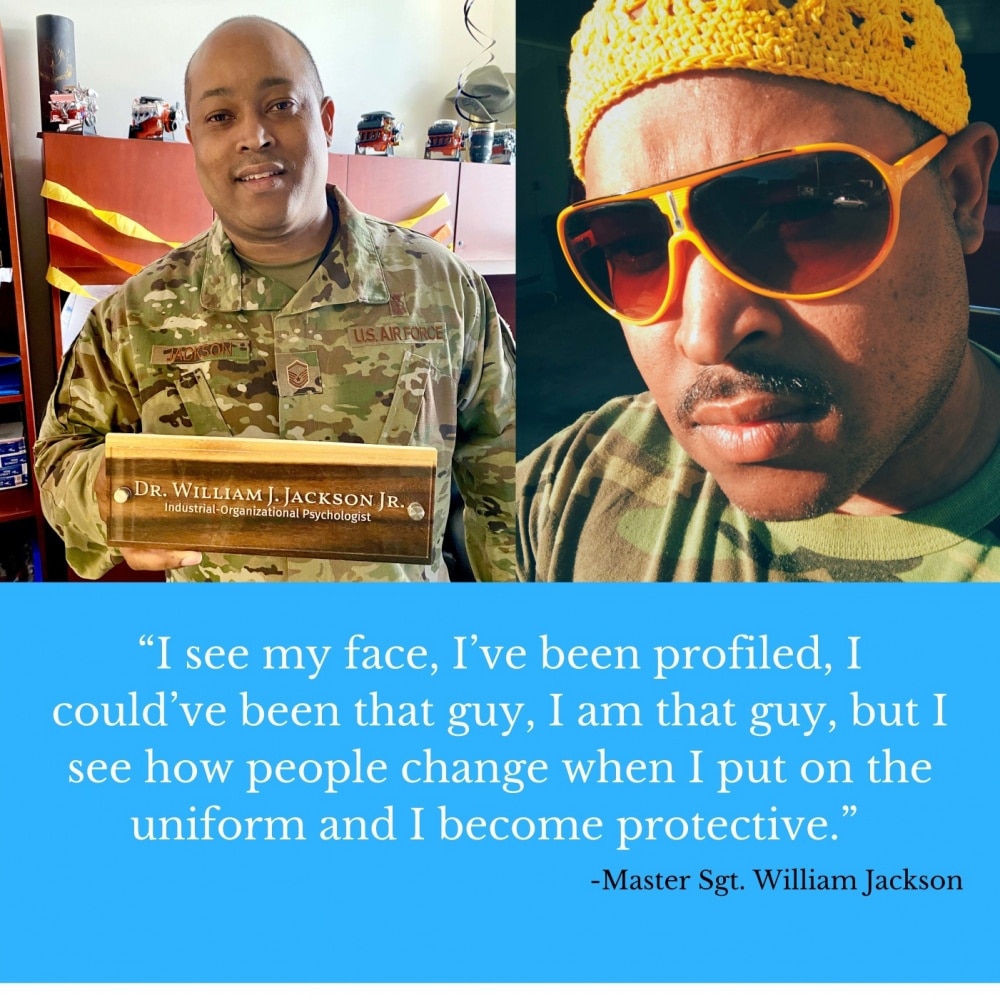 Master Sgt. William Jackson, 15th Medical Group superintendent, created a support group to discuss racial injustice in the military. Jackson noted that he faces racial discrimination in the military, but he also benefits from wearing a uniform. Jackson is currently pursing a Doctor of Philosophy in Industrial-Organizational Psychology and created a name plate for inspiration. (U.S. Air Force graphic by 2nd Lt. Amber R. Kelly-Herard)

On May 25, George Floyd’s tragic death was captured on video as a police officer kneeled on his neck for 8 minutes and 46 seconds.

“George Floyd occurred and I was sitting trying to deal with the imagery and the ongoing battle trying to explain why my life is worth something,” said Jackson.

Unbeknownst to Jackson, his 19-year-old daughter was sitting 6 feet away from him using social media to fight the same battle that he’s been fighting his whole life.

This led him to question, “How many other Black Airmen are going through the same thing?”

With the support of his commander, Jackson initiated a support group for the 15th MDG.

“I love everybody, so I wanted to grow a community,” said Jackson. “Lots of people show up, some don’t say anything, but there’s been really good feedback.”

“So many people say, ‘I didn’t know,’” said Jackson. “The ultimate goal is for everyone to have a fair chance in the Air Force, change the culture, and to have everyone be accepted for their differences.”

For Jackson, talking about race started in his youth growing up in Columbus, Georgia.

Jackson recounted memories of certain friends who suddenly couldn’t play with him anymore or learning his one friend’s father was a member of the Ku Klux Klan.

As an Airman, Jackson stated he encountered several other instances of racial discrimination, but he has also benefitted from wearing a uniform.

“I was a staff sergeant taking my family from Nevada to Georgia because I was on my way to Korea, so I flew my brother and sister out so we could drive two cars,” Jackson recalled. “We stopped for gas and as we were getting back on the ramp, I saw lights behind us.”

Jackson explained the police officer asked him to sit in the patrol car.

Jackson and his brother tried to explain they didn’t do anything wrong, but Jackson also obliged because he didn’t want anything bad to happen in front of his wife and two small children.

“I finally showed him my military ID and explained we were moving,” said Jackson. “His whole demeanor changed and he started talking about his nephew in the Air Force.”

“He let us go and said we ‘kind of swerved,’ he continued.

Unfortunately, Jackson’s experiences are not unique.

“With everything going on within the world and in our country, having an outlet to voice my frustration, anger, concern, and confusion has enabled the chance for me to find my voice again and it has been therapeutic at the same time,” said Staff Sgt. Rhanesha Paczkowski, 15th MDG Base Operational Medicine Clinic non-commissioned officer in charge. “Prior to the support group I was unaware of just how many of us had experienced similar situations and how many of our members were suffering in silence.”

“It was through our testimonies and acknowledgment of differences in conversation that led us as a medical group to work on ‘being the change we want to see,’ the Austell, Georgia, native continued. “Therefore, the best thing that I have gained from the support group is knowing that I have co-workers that are willing to fight and stand up for one another.”

Jackson plans to continue hosting the 15th MDG support groups and hopes to open it up to the entire base with additional events so more Airmen can share their stories and others can learn from them.