From a slow take off to high flying 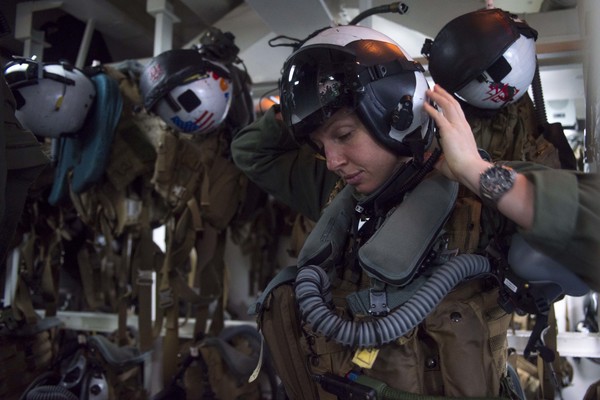 When people meet Capt. Kelsey Casey, they don’t initially think the petite, young woman with an energetic personality is a pilot in the U.S. Marine Corps, but once she starts talking, her charisma becomes apparent, and it’s understandable why she’s the only female AV-8B Harrier pilot in the Marine Corps.

Her dream of flying started at space camp at a young age. To her delight, she was picked to be the simulated pilot and climbed into a small, fake cockpit built to simulate a spaceship taking off.

“Coming out of the final mission, we walked down a hall and all along the walls were these giant posters with every single astronaut team that had been to space,” Casey’s voice changed as she remembered, her eyes searching for the memory. “There were women in some of the later ones. I looked up at that and thought, ‘if they can do it, maybe I can too.’ That’s where it started.”

Casey attended the U.S. Naval Academy following high school. She planned to major in aerospace engineering and Chinese, but learned she would have to attend a year longer than planned, putting her at the bottom of the list to be a pilot. This eliminated her goal of becoming a pilot via the academy route. To fulfill her dream, Casey had only one option – leave the academy.

Casey found herself trekking across the country with everything she owned, trying to navigate her way through a snowstorm. She was alone, scared and her dreams seemed unattainable.

It was her insatiable tenacity and refined grit which led her through the years that followed.

“I’m driving across the country, calling my mom for directions while she also signs me up for courses at a community college in California,” Casey said. “All I could think was ‘wow, my family is going to disown me, I just left this amazing school with a full-ride scholarship, what am I going to do?’ It was a scary thing to go through as a 19-year-old, but it made me better.”

The way Casey saw it, she had only two options: give up or complete her degree and fly. She chose the latter, and like all Marines, attacked the obstacles in front of her to accomplish her mission.

“She was always a little fireball and tireless,” said Nyna Armstrong, Casey’s mother. “She never grows any moss, she’s always moving and is always going in whatever direction she wants despite what challenges she might [face].”

After leaving the academy, Casey made her way to the Bay Area to attend San Francisco State University. During her senior year at SFSU, Casey found herself longing to return to the Naval Academy to fulfill her dream. Again she applied to the academy but was denied. At this point in her life, she was accustomed to adversity and was experienced at overcoming it.

Refusing to give up, she sought out information and spoke to mentors, who encouraged her to pursue a career as a military officer. As a result of her unwillingness to quit, she found a way to accomplish her dream. After she earned a Bachelor of the Arts degree in political science at SFSU, Casey left for Marine Corps Officer Candidate School.

“My daughters and I never look to have special treatment because we are women,” said Armstrong. “The fact she is the only female is a testament to her skill and her drive and her work ethic.”

Though her experience with the Marine Corps has been mostly positive, there have been interesting moments for Casey.

While sitting at breakfast with her Marines, a nice older gentlemen with a veteran hat approached them, Casey explained. They all were in flight suits and wearing the same patches when the gentleman asked their table if they were all pilots. He seemed surprised to see Casey and specifically asked her if they let her fly. She laughed and informed him that not only was she a pilot, but she was also the one in charge.

Interactions like these are somewhat common and highlight a misconception of gender roles in the military; situations such as this motivate Casey to keep proving them wrong.

“As you move, you just keep on making that shift until you finally look around and realize you’ve made it,” she said. “But I don’t feel like I’ve really made it until I’m at an event somewhere and someone comes up to me, and they say ‘I want my daughter or my son to be like you, you are a fantastic role model.’”

Casey believes that the most important lesson is to keep moving forward—an ethos she learned from her uncle, who told her “they can’t kill you, and they can’t stop time.” This advice has helped her overcome many obstacles.

“It’s okay if it doesn’t work out the first time, and you make horrible mistakes because the next thing you know, I ended up getting internships, worked at the state department as an intern, and I worked in a congressman’s office,” said Casey. “I also moved to Colorado to be raft guide for a while before going to The Basic School because I could and then I still ended up going to TBS, commissioning as an officer and becoming a pilot.”

Casey has come a long way since being that wide-eyed little girl with aspirations of flying.

“I don’t think I’m better than anybody else ever,” she said. “I’m very good at failing but I don’t give up after I fail. Just don’t give up. It might take way longer than you thought, it might be really, really hard but anything that’s worth it is going to be hard but it will be worth it.”

Despite a difficult start, Casey succeeded and continued to excel. She completed her training and earned her wings of gold.