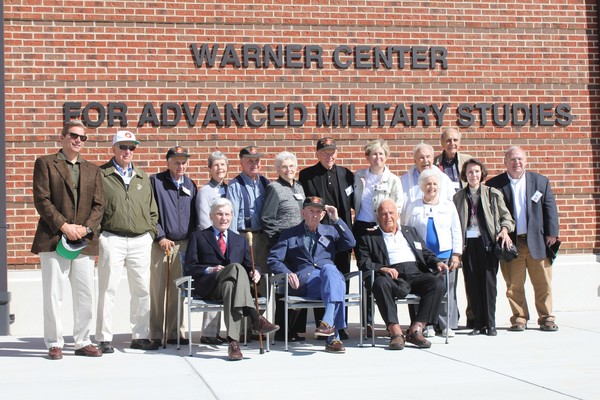 The men held their eighth and final reunion Oct. 15-16. They were taken on a tour of the brand-new John Warner Center for Advanced Military Studies at Marine Corps University. The Warner Center is named for their classmate, former Senator John Warner, who was also present.

“I share the honor of having this building named for me with the 1950 Basic Class,” Warner told his classmates. “You’re as much a part of this building as me.”

He joked that they should write their initials on the wall.

The first Special Basic Class consisted of 360 junior officers from the Marine Corps Reserve. Some had served as enlisted men in World War II. Most had never served as officers on active duty. They went through a shortened version of The Basic School’s officer training course.

“The important thing for us is that we were only here for 10 weeks, compared to active duty officers at the time who were here for six months,” said Louis Buttell, 88, of Silver Spring, Md.

After graduating from the course in late December, 40 members of the class were flown immediately to Korea to support the First Marine Division at the Chosin Reservoir, which had suffered many casualties. Another 75 sailed to Korea on the USS General J.C. Breckenridge in January 1951 and saw their first combat at Wonju.

Nine members of the class were killed in Korea in 1951. Another, Victor Ohanesian, became a career Marine and was killed in Vietnam in 1967. A monument in memory of these men was erected at The Basic School at the class reunion in October 2000.

The Navy Cross was awarded to three members of the class and 12 received the Silver Star.

“The standard you all set is built on still,” said Lt. Gen. Richard Mills, president and chief executive officer of the Marine Corps University Foundation. “Reservists today are fighting to maintain your standards.”

Dr. Charles Neimeyer, a Marine Corps University faculty member, briefed the men on the development of MCU from the Army-centric school of 1920 to the University’s foundation in 1980. He spoke of how the Marine Corps’ three most important documents—the Small Wars Manual, the Tentative Landing Operations Manual, and FMFM-1, Warfighting—were all written here at Quantico.

“Quantico is the center for combat development and academic excellence,” he said.

“When I was here, there was only the Junior School and the Senior School,” Warner said. “Now we have developed a university system that’s on par with that of the Army, Navy, and Air Force.”

Ronald Reese, director of facilities and logistics for MCU, lead the group on a tour of the nearly-completed Warner Center.

“We’ve learned that adults don’t learn the way they did in 1950,” Reese said. “This building is very tech heavy, allowing the students to use information from the internet immediately and connect with folks in Okinawa and Afghanistan.”

The group saw one of the larger lecture halls, which is tiered and concave so that everyone in the room can see everyone else. Television monitors fill one entire wall.

“We want these students to collaborate with each other,” Reese said.

The tour members were greatly impressed by Warner Center.

“When the government finds out about this, they’re going to confiscate it!” Warner joked.

“The Marine Corps has really got it!” said Ray Levesque, one of the Special Basic Class graduates who is also a Navy veteran of World War II.

“There are a lot of colleges that would love a facility like this,” said Angus Deming, 89, who was awarded the Silver Star for action in Korea.

He continued, “I love coming back here to Quantico, because I love meeting new Marines. They are so smart and nice.”