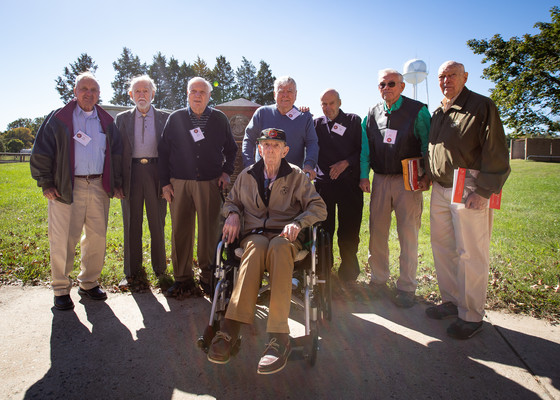 He found himself walking a ridgeline, traversing through frost-biting air and shoveling through snow waist-deep in enemy territory. They decided to stop for the night, but he and his men patrolled the area by order of his commanding officer. The enemy was waiting; bunkers were dug to ambush the U.S. Marines, and they ran into a Korean bunker, who were showering grenades onto them.

“My platoon sergeant dug a fox hole near me,” said 91-year-old Louis “Lou” Buttell, a former captain and infantry officer in the Marine Corps. “A grenade hopped right into his fox hole.”

His platoon sergeant survived the blast, as his gear took most of the impact, he said. Air support was called in the next morning, but the pilot missed the bunker.

“He had to fly through again,” he added. “He flew so close to the ground, we could see the pilot’s goggles.”

The pilot hit the bunker, and his patrol survived.

Lou and about 24 others from The Basic School (TBS) class, called 1st Special Basic Class, consisting of approximately 360 junior officers of the Marine Corps Reserve, traveled to Marine Corps Base Quantico, Virginia, for the 19th and final reunion, October 17-19, 68 years since they graduated the 10-week course in October 1950.

Since 1999, surviving members of the class try to reunite every year to remember those who paid the ultimate sacrifice during the Korean and Vietnam War, and spend time with another. This year tentatively marks the final reunion of the seasoned war veterans, due to medical complications, according to Lou.

Jim Fitzgerald and Frank Bell organized the first reunion in 1999. Lou and his wife, Betty, took the reins going forward; he credits much of the success of the reunions to her, he said. Their daughter, Amy, and son, John, also aided the process as their parents grew older. Lou currently sits in a wheel chair, and Betty sometimes requires assistance to get around.

It was the strength of bonds the class members had between each other, and now she feels as though she knew them her whole life, Amy said.

She wasn’t the only child of one of the classmates to attend the reunion. Carl Annas joined this year since his father, former Capt. Carl J. Annas, passed away three years ago.

“I felt compelled to come here and learn more about the Corps, what he went through, meet some of the men he fought with, and try to get some of that camaraderie and understanding from his past life,” Annas explained.

The class erected a memorial monument for their fallen brothers aboard TBS during the 2000 reunion in October. They also have their names etched in bricks that are laid outside of the National Museum of the Marine Corps in Triangle, Virginia. Even a building of Marine Corps University, Warner Center, aboard Quantico, was named after one of their classmates, former Senator John Warner.

Rich in history and experience, these Marines shared their stories with one another, joyously laughing and imitating their younger selves. They enjoyed one another’s company, but the thought of their fallen comrades never seemed to leave them.

“It was cold today, but I wasn’t thinking of the weather.” Former Second Lt. Angus Deming, a Silver Star recipient, said comically, but ended on a grave tone. “I was thinking of the cold.”

Korea is home to the coldest battle the Marine Corps faced, the battle of Chosin Reservoir. While not all fought during that battle, their experiences were too, just as cold.

Fitzgerald was the first Marine to be wounded of the classmates. He arrived in Korea, January 20, 1950, who “flew out soon after Christmas week,” Deming said. He led a 60-man patrol into enemy territory, where they fought in a “serious” firefight. Fitzgerald was hit by a ricochet bullet, blinding him in one eye and cutting part of his ear.

“I cite his ordeal as an illustration about how abruptly the members of 1st Special Basic Class were sent directly into combat soon after leaving Quantico,” he said. “Not only did they arrive soon after Quantico, they received casualties almost immediately.”

He continued to explain other morbid milestones of his class; Felix “Bill” Goudelock was the first member who perished, February 2, 1951; Victor Ohanesian was the last to pay the ultimate price, killed in action during Vietnam, March 1, 1967. He told the stories of many others in great detail, as if he was there as a witness.

Those in attendance of Deming’s remembrance of their brothers-in-arms sat tall in their seats, what seemed as pride for their bravery in the darkest hour. Others held back tears, held the frog in their throats, and pushed back the emotion as far as they could until they couldn’t anymore.

“All of them are proud of their history and respectful of those who paid the ultimate price,” said John DeBerry, the visit coordinator for Quantico. “They have character and use what the Marine Corps taught them to become successful.”

Hugh Hardy and Jack Frisbie reached the rank of major general while many others became full colonels. Morey Sear of Louisiana, Louis Stanton of New York and Robert Bork of Washington D.C. became federal judges.
Current Commandant of the Marine Corps, Gen. Robert Neller, heard the story of these men from Warner, who spoke to him about visiting them, according to Lou. Neller met them during afternoon ‘chow,’ soon after the ceremony for the 300th Medal of Honor recipient, Sgt. Maj. John Canley, for his bravery in Vietnam, concluded.

“I just wanted to stop by and pay my respects to you,” Neller said. “Thank you for your service and getting together, staying in touch with one another like Marines are supposed to do.”

They concluded the reunion at the National Museum of the Marine Corps and a special dinner.

Only a fraction of the 360-member class survive today. Many of them are working up to 10 years shy of a century in age.

“I know they are up there; they’re looking down on us wondering, ‘How did they get so old?’” Deming exclaimed humorously. He continued to explain they “didn’t have the chance to grow old,” and that they are “forever young.”

“If they could leave a message with us, I feel like it would say ‘remember us,’” he said. “We would send a message back saying ‘we remember you.’”

This was written in memory of the fallen servicemembers and survivors of the 1st Special Basic Class of October 1950.