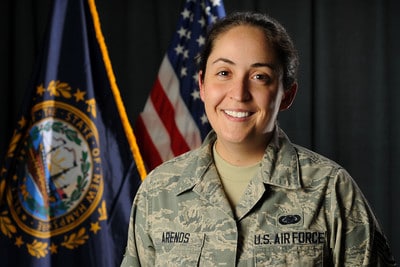 Surrounded by the lush, green, hilly terrain of San Salvador, for two weeks in July one 157th Air Refueling Wing command post controller worked as a bilateral affairs representative and translator in the U.S. Embassy.

Under the SPP, the airmen and soldiers of the New Hampshire National Guard have collaborated with members of the Salvadoran armed forces in support of the Beyond the Horizon exercise, which promotes cooperative civilian and military relationships between the U.S. and El Salvador.

“I worked in the Security Cooperation Office at the U.S. Embassy,” Arends said.

There, she used her Spanish-language skills. She replied to requests for official training proposals, worked to ensure selected Salvadoran service members had appropriate clearances to attend specific training events and conferences, and coordinated with the travel office to book travel for these events. Arends also helped plan future New Hampshire National Guard partnership events in both El Salvador and New Hampshire.

“This is a great opportunity for a National Guardsman to work outside their state with the active duty in a joint environment,” Youngs said.

Through initiatives such as the SPP, the U.S. also builds and maintains strong relationships with other nations, ensuring mutual peace and prosperity.

“The biggest project that I directly helped to accomplish was given to us on a Friday afternoon, with less than a week to execute after receiving official authorization to proceed,” Arends said. “The almost impossible task: Send 67 Salvadoran ROTC cadets to a month-long training at Fort Benning, Georgia. After what seemed like an impossible six days of negotiating, vetting, expediting the cadets’ visas and coordinating transportation to and from the course, we managed to successfully send 65 cadets.”

Arends said that stepping outside her traditional role within the command post gave her perspective she would not otherwise have gained. Working in a joint environment, she said she witnessed a diverse group of organizations working toward shared objectives.

“As long as you have a supportive team and members who are willing to come together despite differences in branches, rank, and even languages, whatever tasks are presented can be accomplished,” Arends said. “It was truly impressive to see such collaborations happening within the U.S. Embassy that directly supported the local government as well as helped to further train and support the U.S. government and the New Hampshire National Guard.”

South Carolina Guard Prepares to Help During, After Hurricane Florence