QUANTICO, Va. — Marine Corps 2nd Lt. Zachary Bowman, a native of Greensburg, Pennsylvania, had what most would consider a successful life. After graduating from Winthrop University, he relocated to Charlotte, North Carolina, where he began a career in real estate. Though his new job was everything he had worked for in college, he was left feeling unfulfilled.

Bowman missed being part of a team. “I had always been on a team sport and part of a team atmosphere, but I didn’t have much of that anymore,” he said.

In 2017, Bowman found what he was looking for inside a CrossFit gym.

“One coach there was a prior-service Marine,” he said. “There was a picture of him and all his buddies from the Marine Corps on the wall. I saw it every day when I would come in. That’s when I realized the Marine Corps is something I would like to do.”

Bowman’s mind was set, but he had an obstacle to overcome: his weight. By Marine Corps standards, Bowman was 35 pounds overweight, and he scored low on his initial physical fitness test. He began his training with Marine Corps Maj. Trey B. Kennedy with the Officer Selection Station in Charlotte, North Carolina, where he applied to become a part of the Platoon Leaders Class program. 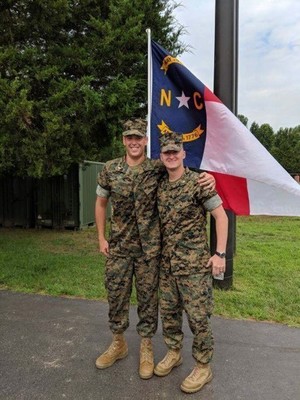 “When I first met Candidate Bowman, he was far from meeting the Marine Corps’ standard,” Kennedy said. “His devotion to achieving his goal of becoming an officer in the United States Marine Corps was unwavering. His progress was impressive.”

Bowman said he weighed 250 pounds when he decided to join the Marine Corps. “But I started working out every day, and by the time I was ready to leave for [Officer Candidates School], I was 213 pounds,” he added.

“I am very proud of him,” said his mother, Tammy Bowman. “I would have never thought he would have done anything like this. If you told me back then that he was going to join the military, I would have said you were crazy.”

Bowman said he aspires to become a lawyer, and the Marine Corps has created a path for him to achieve his goal. After completing the Basic School, Bowman will attend the Naval Justice School, where he will learn the basic aspects of military law and responsibilities of a Marine Corps judge advocate.

“He used to tell me that he wanted to be lawyer,” the lieutenant’s mother said. “I told him that he wouldn’t be making a lot of money, but without hesitation he said to me, ‘I don’t care about the money. I want to help people and serve my country.’ And that’s my son.”