DoD, DoS, USAID Work Together to Provide Aid for Venezuelans 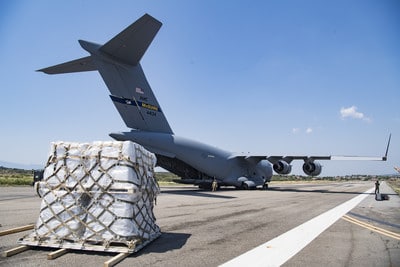 Three C-17 Globemaster III cargo aircraft from Joint Base McGuire-Dix-Lakehurst, N.J., and Joint Base Charleston, S.C., delivered humanitarian aid to Cucuta, Columbia, Feb. 16, 2019 in coordination with the Department of State and the United States Agency for International Development.

The United States is responding to Interim President Juan Guaido’s request to help meet the urgent needs of the people of Venezuela. The Department of State, USAID, and the Department of Defense, in a cooperative effort, delivered aid ready for distribution within Venezuela to Cucuta, Colombia.

“United States Air Force humanitarian aid missions are the most meaningful missions that we fly,” said U.S. Air Force Capt. Susan Jennie, pilot, 6th Airlift Squadron, Joint Base McGuire-Dix-Lakehurst, N.J. “The opportunity to fly these kinds of missions was my biggest motivation to train and fly on the C-17. To be able to help out and bring aid to those in need, when needed, is one of the most rewarding opportunities I’ve been presented in my life and career.”

Department of State and USAID officials joined the flight of humanitarian assistance that left Miami. In Cucuta, USAID, U.S. Department of State, Colombian officials, and representatives of Venezuelan Interim President Guaido welcomed the supplies to augment aid already pre-positioned at the humanitarian assistance center. Working in close coordination with Colombia and President Guaido’s representatives, this assistance addresses the greatest needs for the most vulnerable populations in Venezuela.

“The U.S. military has a long history of supporting USAID-led aid missions and working with international relief organizations to provide aid to people impacted by life-threatening crises and disasters,” Hernandez added.

This humanitarian mission underscores the United States’ firm commitment and readiness to respond to the man-made political, economic, and humanitarian crisis in Venezuela.