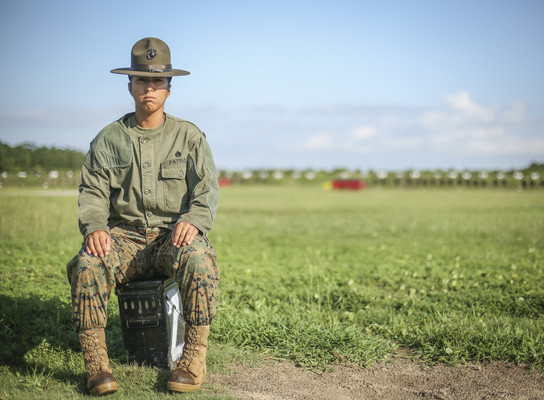 Surrounded by a sea of recruits and the smell of hot brass, it’s easy to spot Staff Sgt. Estefania Patino’s campaign cover and trademark green marksmanship instructor jacket as she patrols Chosin rifle range’s firing line, inspecting weapons and encouraging shooters as they sight in on their targets.

Patino is a Primary Marksmanship Instructor; a Marine whose job it is to make riflemen out of the recruits. To them, she is a shooting guru; but they would never guess that prior to joining the service Patino had never fired a weapon.

A Laredo, Texas native, Patino first developed her interest in shooting during recruit training, where she, like many Marines, fired a weapon for the first time in her life. It was not a natural experience for Patino, who struggled at first.

“In bootcamp, I was actually really bad, I got sharpshooter,” she said. All I remember about the first time shooting was that it was cold and it was December. It wasn’t natural to me and took a lot of practice and reiteration for me to learn how to shoot. Once I got comfortable with it, I loved it.”

While stationed in Okinawa, Patino volunteered to go through the Combat Marksmanship Coach Course, where she honed her rifle marksmanship skills and learned to shoot a pistol for the first time. She said there were a lot of “Teachbacks” during the course, where Marines had to memorize certain knowledge and teach it back to their instructors. Where other Marines struggled, Patino excelled, and her love for teaching grew along with her love for shooting.

“I love that I would be able to help my Marines through the process because I was able to memorize the knowledge and sustain it,” Patino said.

Patino later volunteered for Drill Instructor Duty and was sent to Marine Corps Recruit Depot Parris Island.  While training recruits, she noticed there were trends of female recruits not performing as well on the range as Patino felt they could. Utilizing her past experience as a marksmanship coach, she stressed the importance of marksmanship knowledge to her recruits and in turn, her platoons were recognized for their improved performance.

Later, she decided to pursue the challenge of becoming a Primary Marksmanship Instructor, something few drill instructors had done before.

“I became a PMI because I enjoyed teaching marksmanship as a drill instructor,” Patino said. “My PMIs were always very helpful in helping me better assist my recruits.”

Patino, with the backing of her leadership at 4th Recruit Training Battalion, was determined to excel at the job.

“I went through the course like any other Marine did,” Patino said. “There were Corporals, Sergeants, and I was the only Staff NCO, the only female, but I don’t think that altered anything. I was one of the only Marines who passed everything on the first try, so I like to think that showed my work ethic, not only as a person but as a Marine, not being a female or a Staff Sergeant.”

The transition from drill instructor to marksmanship instructor was a bit of a culture shock, Patino said. Her senior drill instructor trained her to be an aggressive leader, and her recruits knew it; but as a PMI, Patino realized she had to reel in her intensity for the sake of the recruits. They couldn’t be at the position of attention; they couldn’t yell back commands because it would alter their shooting negatively. Patino learned to drop the persona of the hard-nosed DI and relate to recruits on a personal level.

“I don’t see female or male Marines, I see the quality of a Marine and I put myself in their position,” said Patino, describing her teaching process.
“I don’t put on a persona for them and I tell them that I struggled and I got nervous. I try to make them comfortable and tell them that if they keep trying and they keep pushing that maybe one day they’ll get to wear this green jacket.”

Gunnery Sgt. Angelica Dixon, senior drill instructor for Platoon 4036, Oscar Company, and a close colleague of Patino’s said it was her passion for teaching that drove her to pursue becoming a PMI.

“Weapons were her passion from the beginning, but I also believe she was born to teach,” Dixon said. “She’s a hard worker, she never complains; even when we were all tired, she’d always move quickly and demanded a lot of her recruits.”

Dixon added that Patino’s drive for mentoring and coaching on the range opened the door for more female drill instructors to pursue becoming PMIs.

“Besides making Marines, she’s also making marksmen, and for a recruit to see that is inspiring,” Dixon said. “She kept pushing to get to where she is, and that’s what every Marine should do. If you want to do something, don’t let anything stop you, and she didn’t let anything stand in her way.”

“I’d like to take the knowledge that I have from the range and share it with my [drill instructors] and teach them how they can better prepare their recruits for the range, even if it’s something small,” she said. “My [senior drill instructor] taught me how important the range is. When brand new Marines get out to the fleet, they’re all going to have the same one ribbon, but their shooting badge is always going to be what sets them apart.”