Deployed Marine Captain trains for race in memory of daughter 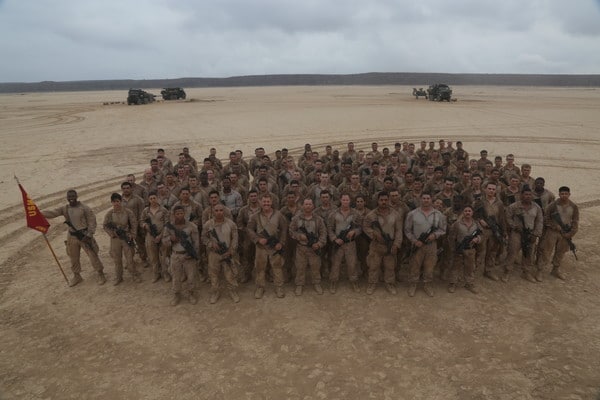 U.S. Marine Capt. John Watkins has to get creative when it comes to training for the Santa Rosa Ironman while deployed at-sea with the 13th Marine Expeditionary Unit, but he pushes through long runs on the treadmill and hours on the stationary bike because of the support from his family back home and the memory of his daughter, Amelia “Millie” Mae Watkins.

Watkins is racing to raise money and awareness for neuroblastoma, a highly aggressive form of cancer that hundreds of children, mostly under the age of one, are diagnosed with each year. It is a cause that is close to the heart of Watkins and his family.

In the summer of 2017, the Watkins family was traveling to California on military orders when they noticed that their 10-month-old daughter, Millie, was not feeling well. They stopped at the Phoenix Children’s Hospital where she was diagnosed with stage four neuroblastoma.

Immediately following her diagnosis, Millie underwent five days of extensive chemotherapy and kidney dialysis. At only 10-months-old, young Millie’s body could not handle the treatment, and she passed away.

“Before Millie passed away, I held her in my arms and I promised her that I would always love her, I would never let her memory die, and I would do big things in her name,” said Watkins.  “This year is another chance for us to spread her story and continue doing big things in an effort to raise awareness of childhood cancer, and to help fund research to destroy this terrible disease.”

While in the middle of a strenuous pre-deployment training program with the 13th MEU in April of 2018, Watkins participated in his first half-Ironman in Oceanside, California, to raise money and awareness in the memory of his daughter. The Santa Rosa Ironman in May will be his first full-length Ironman.

“Staring at the same rivet in a wall for three hours on a spin bike is painful, but when it really starts to suck, I think about how Millie would smile when I walked into a room, the sound of her contagious belly laugh, and the fact that for eleven months of her life she was the happiest baby in the world, all while this cancer was attacking her from the inside,” Watkins said. “If she could smile through all of that, a little bit of sweat is a small price to pay.”

“My family is my foundation, and their strength is the reason I’m able to do what I do,” said Watkins. “Being gone for more than eight months is taxing on any family, but knowing that I can trust my wife to take care of my family at home allows me to focus my efforts on accomplishing my mission, taking care of my Marines, and bringing the Marines and our equipment home in one piece.”

The Essex Amphibious Ready Group and the 13th MEU are currently deployed to the U.S. 5th fleet area of operations in support of naval operations to ensure maritime stability and security in the Central Region, connecting the Mediterranean and the Pacific through the western Indian Ocean and three strategic choke points.