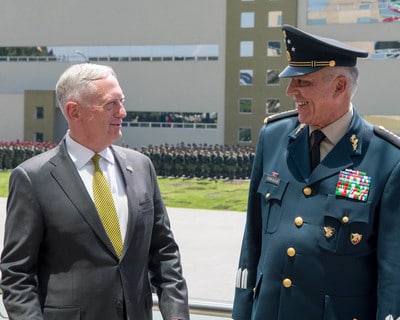 Democracy is succeeding in Latin America and can be a beacon to the rest of the world, Defense Secretary James N. Mattis said yesterday at the Defense Ministerial in Cancun, Mexico.

“From Ottawa to Buenos Aires to Santiago, from south to north and from east to west, our nations increasingly represent an island of democratic stability amidst a global sea of instability due to malign influence,” Mattis said during his address. “In bringing us together, Mexico continues to show important strategic leadership building trusted relationships between us based on respect, cooperation, and mutual understanding.”

Mattis said there are challenges to stability and security in the Americas, from transnational criminal syndicates to illegal immigration to humanitarian issues.

Partnership among the nations of the hemisphere is crucial to addressing these challenges, he said.

Cuba, Nicaragua and Venezuela are the exceptions to the rule in the region. Mattis called the leadership in Cuba “sad and unresponsive.” Nicaragua and Venezuela tried to model their countries after Cuba. But the nations, “cannot hide from the reality they face as the world recognizes that the Cuba model no longer works for anyone, even Cuba,” he said.

“Democracy is working,” Mattis said. “Our democratic nations send a message as we uphold our shared values, including respect for human rights, the rule of law, and sovereignty. And that message reverberates around the globe.”

The success is seen even in nations like Russia and China that still try to tear down the existing international order to emplace something that benefits them alone. Mattis said those countries “threaten sovereignty with predatory investments, piling up massive debt and seeking undue influence over other countries diplomatic, political, and economic decisions.”

He called on the hemispheric nations to remain steadfast in the commitment to foster greater understanding and cooperation. “We see the positive impact our growing partnerships have for ensuring peace and stability in this region and beyond,” Mattis said. “We see it in this very room as we listen with respect to each other and the vision we have so we can collaborate better together.”

The challenges in the hemisphere cannot be addressed by one nation alone, Mattis said. “In tackling such difficult challenges together, we prove that like-minded nations are stronger when we collaborate, that we are then more responsive in serving our populations when disaster strikes,” he said. “So I express my support for making humanitarian assistance and disaster relief a permanent theme for the CDMA and for the Inter-American Defense Board to play a more intense role in strengthening regional humanitarian assistance/disaster relief cooperation, and my Department will stand with you, will stand alongside you, when trouble looms.”

Mattis noted the decision to send the hospital ship USNS Comfort is one example of cooperation. The ship will help relieve the strain on local health care systems overburdened by caring for refugees from Venezuela.

“We note that in the midst of … this man-made disaster in Venezuela that Russia is sending a bomber, while the U.S. Navy is sending a hospital ship with doctors,” he said.

The Comfort’s medical staff will come from the U.S. Navy, as well as Mexico and other area countries.