Dark horse in the Mountains 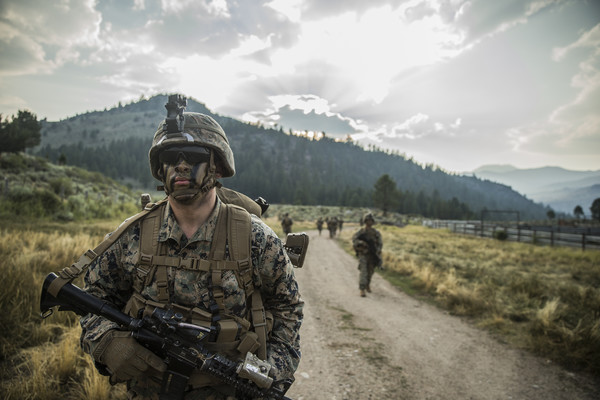 Marine Corps Mountain Warfare Training Center Bridgeport, CA – As the Marines Corps Hymn boasts, Marines must be prepared to operate in any clime and place whether it be a desert, mountains or anything in between. Each environment poses its own unique set of challenges but training in those environments helps to prepare Marines to overcome those challenges. The Marines of 3rd Battalion, 5th Marine Regiment, 1st Marine Division, took on a unique set of challenges in their latest field operation in the Sierra Nevada Mountain Range.
In order to ultimately be ready to deploy with the 11th Marine Expeditionary Unit (11th MEU), U.S. Marines and Sailors with 3rd Bn., 5th Marines, conducted a field exercise at Marine Corps Mountain Warfare Training Center (MWTC)Bridgeport, Calif., from July 17 to Aug. 9, 2018, during which they also conducted their Marine Corps Combat Readiness Exercise (MCCRE).
According to Capt. Dilan Swift, the assistant operations officer for 3rd Bn., 5th Marines, the battalion was at MWTC Bridgeport for Mountain Exercise (MTX) 4-18. This exercise was an opportunity for 3rd. Bn., 5th Marines and its supporting units to conduct operations in a mountainous, high altitude environment.
The Marines of 3rd Bn., 5th Marines, conducted a plethora of training operations that they would not have the opportunity to do on any of the other Marine Corps bases on the West Coast.
“While out here we’ve done river crossings to help build our endurance as well as help us understand and appreciate that climates and situations aren’t always comfortable,” said Staff Sgt. Juan Fuentes, an infantry unit leader who acted as the assistant operations chief during the field exercise. “We also practiced rappelling and climbing up the cliffs of these beautiful mountains here during cliff assault operations.”
Training in an area like Bridgeport is no small task and is not without its share of challenges.
“Due to the different terrain, dense vegetation and low oxygen levels, it is very challenging for us and allows us to push ourselves in ways we haven’t before,” said Fuentes. “Marines had to overcome their exhaustion while moving in this terrain, enduring the cold, overcoming their fears, whether it be of heights or anything else, to complete or help to complete their mission.”
Improvise, adapt and overcome is one of the Marine Corps’ unofficial mottos and the Marines of 3rd Bn., 5th Marines, had to do just that during this field exercise.
“We had to adapt and adopt new ways of doing things to overcome certain challenges that we have never had to deal with and are not used to,” said Fuentes.
3rd Bn., 5th Marines, was evaluated during their time in Bridgeport to certify that they are prepared to go on a deployment with the 11th MEU and conduct their core mission essential tasks (MET).
“We have four core METs that the battalion has to train on,” said Lt. Col. Geoffry Hollopeter, the commanding officer of 3rd Bn., 5th Marines. “The two specific core METs that we are supposed to train up to the battalion level and perform during the MCCRE is offense and defense. What we’re trying to get out of this exercise is to be evaluated on our offense and defense as a battalion by our higher regiment to certify that we can deploy and perform those core METs on deployment.”
After the exercise 3rd Bn., 5th Marines, will attach to the 11th MEU in preparation for their deployment next year. As a sea-based Marine Air-Ground Task Force while deployed, the 11th Marine Expeditionary Unit acts as a forward-deployed expeditionary crisis response force, embarking troops, vehicles, aircraft, and equipment aboard war ships.
The unit had a challenging month at Bridgeport, but they came out as a better battalion because of it.
“This is my third MTX and I’ve seen it from many different perspectives: as a platoon commander, executive officer and now as an assistant operations officer, those experiences have given me some perspective and context to see that this battalion has done very well over all,” said Swift. “The Marines have a lot to work on, we all do, but the staff did well, the companies did well and the Marines really challenged themselves and accomplished a lot.”