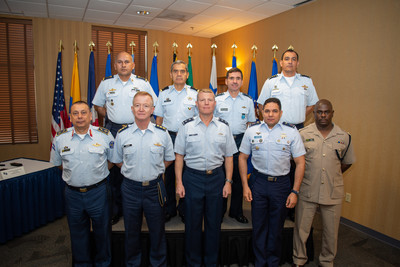 Eight countries participated in the three-day conference, which focused on humanitarian assistance and disaster response and how to leverage air force partnerships in those areas.

“It’s about partnerships,” said Lt. Col. Roderick Rowe, Jamaican Defense Force Air Wing commander. “In these conferences, you build bridges, you can call on a partner nation to say we are willing to assist in an endeavor. So, if a partner can supply an aspect of need, we can better share and leverage our resources to the benefit of our fellow man.”

Each participating Air Force representative shared information on their own unique capabilities as well as past challenges and successes.

“We can do things alone, but together, we can reach greater success,” stated Gen. Quintana.

Additionally, participants discussed the importance of the enlisted force to air force operations and visited the 612th Air Operations Center and the 309th Aerospace Maintenance and Regeneration Group during the conference.

This conference is an example of 12th Air Force’s (Air Forces Southern) enduring partnership with Latin American Air Forces and reflects the United States’ enduring promise of friendship, partnership, and solidarity with the Americas.